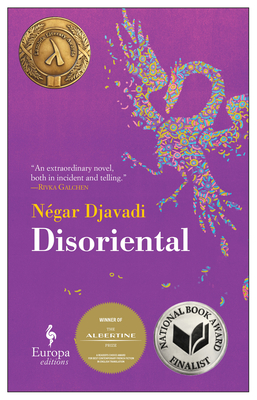 Djavadi has woven history and character together into a family's story of loss of place. When immigration plays such a prominent part in political discourse these days this novel shows how lives are affected. Through Kimia's narrative we experience her family's struggles to maintain a life in Iran and when that is no longer possible what migration means in a new country. A variegated family, whose the old culture gives way to the new, is wonderfully portrayed through the eyes of the most different sister. Tina Kover deserves kudos for her fluid translation. — From Jeff's Picks

National Book Award Finalist: "A multigenerational epic of the Sadr family's life in Iran and their eventual exile . . . Full of surprises" (The Globe and Mail).

Winner of the 2019 Albertine Prize and Lambda Literary Award Kimi Sadr fled Iran at the age of ten in the company of her mother and sisters to join her father in France. Now twenty-five and facing the future she has built for herself, as well as the prospect of a new generation, Kimi is inundated by her own memories and the stories of her ancestors, which come to her in unstoppable, uncontainable waves. In the waiting room of a Parisian fertility clinic, generations of flamboyant Sadrs return to her, including her formidable great-grandfather Montazemolmolk, with his harem of fifty-two wives, and her parents, Darius and Sara, stalwart opponents of each regime that befalls them. It is Kimi herself--punk-rock aficionado, storyteller extraordinaire, a Scheherazade of our time, and above all a modern woman divided between family traditions and her own "disorientalization"--who forms the heart of this bestselling and beloved novel, recipient of numerous literary honors. "Where initially Disoriental seems focused on Kimi 's father and his pro-democracy activism--first against the Shah, then the Ayatollah Khomeini--this is truly Kimi 's story of disorientation--national, familial and sexual--and finding herself again."--The Globe and Mail "A tour de force of storytelling . . . Djavadi deftly weaves together the history of 20th-century Iran and] the spellbinding chronicle of her own ancestors. . . . Perfectly blends historical fact with contemporary themes."--Library Journal "Riveting . . . Djavadi is an immensely gifted storyteller, and Kimi 's tale is especially compelling."--Booklist (starred review) "A wonder and a pleasure to read."--Rivka Galchen, author of Atmospheric Disturbances WINNER 2019 ALBERTINE PRIZE WINNER 2019 LAMBDA LITERARY AWARD FINALIST 2018 NATIONAL BOOK AWARD FINALIST 2019 CLMP FIRECRACKER AWARD FINALIST 2019 BEST TRANSLATED BOOK AWARD WINNER LE PRIX DU ROMAN NEWS WINNER STYLE PRIZE WINNER 2016 LIRE BEST DEBUT NOVEL WINNER LA PORTE DOR E PRIZE ONE OF THE GLOBE & MAIL'S BEST BOOKS OF 2018