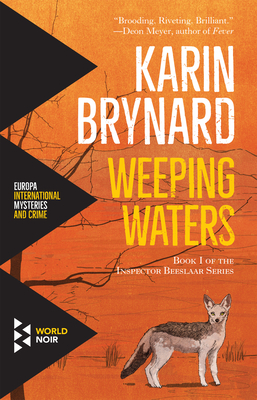 Life on a farm in the dry veld in South Africa is not for the fainthearted. Nature's challenges include human fauna. The legacy of apartheid and Afrikaner pioneers is the backround for the murder of a sister and her estranged sibling's effort to pick up the pieces. Sara will and try to reconcile her guilt and navigate all the people who have an interest in the farm. These include the recently transplanted city detective, fellow Afrikaner farmers, indigenous people of different ethnic groups, and others. Such a stew, such a fun read. — From Jeff's Picks

Shortlisted for the International Dagger Award and Winner of the University of Johannesburg Debut PrizeInsp. Albertus Markus Beeslaar is a traumatized cop who has abandoned tough city policing and a broken relationship in Johannesburg for a backwater post on the edge of the Kalahari Desert. But his dream of rural peace is soon shattered by the repeated attacks of a brutally efficient crime syndicate, as he struggles to train and connect with rookie local cops Ghaap and Pyl, who resent his brusqueness and his old-school ways.
A beautiful and eccentric artist and her four-year-old adopted daughter are murdered on a local farm, and angry white farmers point to her enigmatic Bushman farm manager as a key suspect. Along with Ghaap and Pyl, Beeslaar is plunged into the intrigue and racial tensions of the community, and finds that violence knows no geographical or ethnic boundaries.
Weeping Waters marks the beginning of a great new series with a striking setting, a strong ensemble of characters, and suspenseful storylines. "Brooding. Riveting. Brilliant."--Deon Meyer, author of Blood Safari

Karin Brynard is a former political and investigative journalist and uses her research skills and eye for detail to fascinating effect in Weeping Waters. She is, today, one of Penguin South Africa's biggest authors. Maya Fowler is a novelist, editor and translator living in Cape Town, South Africa. Her debut novel, The Elephant In The Room, (Kwela, 2009) was shortlisted for the Herman Charles Bosman prize. Isobel Dixon was born and educated in South Africa, and in Edinburgh where she completed Master's degrees in English Literature and Applied Linguistics. She has translated novels from the Afrikaans and her debut poetry collection Weather Eye (Carapace, 2001) won the Sanlam and the Olive Schreiner Prizes in South Africa. Dixon is Head of Books and a Director of the Blake Friedmann Literary Agency, where she represents writers from around the world, among them Sunday Times and New York Times bestsellers and international prize winners.