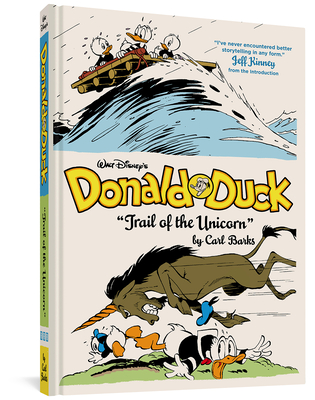 This is book number 8 in the The Complete Carl Barks Disney Library series.

“In Carl Barks' Duckburg we see all the human frailties: Donald Duck's anger, Scrooge's ambition, the Beagle Boys' greed. Barks was a virtuoso artist and writer who combined breakneck action with detailed and subtle art. You will find a master at his peak in 'Lost in the Andes,' and your inner-child will thank you.”
— Eric Schultheis, Books Inc., Berkeley, CA

Donald Duck, Huey, Dewey and Louie go to catch a unicorn for Uncle Scrooge in one of the stories in this collection of world-famous comics.

It's off to Shangri-Lala for Donald, Huey, Dewey, and Louie, on a perilous expedition to bring back a rare unicorn for Uncle Scrooge! But it's not as easy as it sounds, with a mysterious stowaway, intrigue, and double-crosses in this land of many secrets. But once you do catch a unicorn, what, exactly, do you do with him? Then, in a trio of frigid challenges—"Luck of the North," "Land of the Totem Poles," and "Serum to Codfish Cove"—the Ducks must face the perils of the north. Each story has been meticulously restored and re-colored. Insightful story notes by an international panel of Barks experts. Introduction by Jeff Kinney, best-selling author of Diary of a Wimpy Kid.

Carl Barks (1901-2000, b. Merrill, Oregon; d. Grants Pass, Oregon), one of the most brilliant cartoonists of the 20th century, entertained millions around the world with his timeless tales of Donald Duck and Barks’s most famous character creation, Uncle Scrooge. Over the course of his career, he wrote and drew more than 500 comics stories totaling more than 6,000 pages, most anonymously. He achieved international acclaim only after he semi-retired in 1968. Among many other honors, Barks was one of the three initial inductees into the Will Eisner Comic Awards Hall of Fame in 1987. (The other two were Jack Kirby and Will Eisner.) In 1991, Barks became the first Disney comic book artist to be recognized as a “Disney Legend,” a special award created by Disney “to acknowledge and honor the many individuals whose imagination, talents, and dreams have created the Disney magic.” He has been similarly honored in many other countries around the world.

This book contains many more examples of the sorts of stories that made [Barks] so rightly famous, including a couple of epic globe-trotting adventures, plenty of swiftly swelling domestic comedies, and two Christmas comics, which Barks seems to have specialized in.
— J. Caleb Mozzocco - School Library Journal

These stories are now being presented in, arguably, their finest editions ever (at least in English), and they deserve the appreciation of every reader. ... The adventure stories are some of the best ever created. ...[J]ust open the book at random and read to be convinced of Barks' singular indispensability.
— Tim O'Neil - The A.V. Club

The colors are vibrant... and the larger print-size highlights Barks’s unmatched virtuosity as a comics storyteller. ... In short, another stunning installment of impeccable — and much needed — color reprints of the work of a comics master.
— Eric Hoffman - Comics Bulletin