The Talent Code: Unlocking the Secret of Skill in Sports, Art, Music, Math, and Just About Anything (CD-Audio) 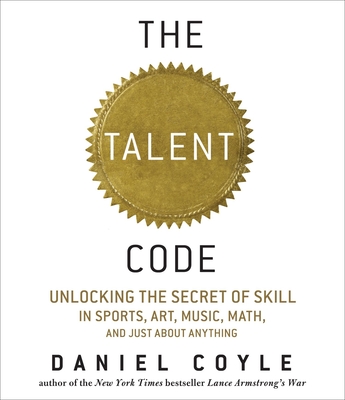 A New York Times bestselling author explores cutting-edge brain science to learn where talent comes from, how it grows—and how we can make ourselves smarter.

How does a penniless Russian tennis club with one indoor court create more top 20 women players than the entire United States? How did a small town in rural Italy produce the dozens of painters and sculptors who ignited the Italian Renaissance? Why are so many great soccer players from Brazil?

Where does talent come from, and how does it grow?

DANIEL COYLE is the author of The Talent Code and the New York Times bestseller Lance Armstrongs War and Hardball: A Season in the Projects. A contributing editor of Outside magazine, he lives with his wife and four children in Homer, Alaska and Cleveland, Ohio.

JOHN FARRELL made his stage debut in high school in the title role of Barbara Garson's political satire "Macbird". Since then, he has made thousands of appearances onstage, on camera and in front of the microphone. Among his many credits are numerous radio and tv commercials, documentaries, audio books and the voice of Franklin, the wise old British car, in the "Auto B. Goode" cartoon series. He lives in Minneapolis with his wife, Jeanine.

“Coyle’s work becomes as motivational as the stories he presents. John Farrell reads with a voice that is at once firm yet highly identifiable. The resulting recording serves as a fine instructional guide for those searching for how to fulfill their dreams.”
—Publishers Weekly

“[Farrell] lays out the technical information and fascinating case histories with unwavering respect for the author’s contribution to adult learning.”
—AudioFile