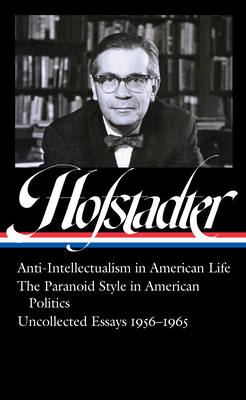 Together for the first time: two masterworks on the undercurrents of the American mind by one of our greatest historians

Richard Hofstadter's Anti-Intellectualism in American Life and The Paranoid Style in American Politics are two essential works that lay bare the worrying trends of irrationalism, demagoguery, destructive populism, and conspiratorial thinking that have long influenced American politics and culture. Whether underground or--as in our present moment--out in the open, these currents of resentment, suspicion, and conspiratorial delusion received their authoritative treatment from Hofstadter, among the greatest of twentieth-century American historians, at a time when many public intellectuals and scholars did not take them seriously enough. These two masterworks are joined here by Sean Wilentz's selection of Hofstadter's most trenchant uncollected writings of the postwar period: discussions of the Constitution's framers, the personality and legacy of FDR, higher education and its discontents, the relationship of fundamentalism to right-wing politics, and the advent of the modern conservative movement.

Richard Hofstadter (1916-1970) was the author of many classic and bestselling works of American history, among them Social Darwinism in American Thought (1944), The American Political Tradition: And the Men Who Made It (1948), The Age of Reform (1955), and America at 1750: A Social Portrait (1971). He spent most of his career teaching at Columbia University. He was the recipient of two Pulitzer Prizes, for The Age of Reform and Anti-Intellectualism in American Life.

Sean Wilentz is the George Henry Davis 1886 Professor of American History at Princeton University. His many books include The Politicians and the Egalitarians: The Hidden History of American Politics (2016); Bob Dylan In America (2011); and The Age of Reagan: A History, 1974-2008 (2008). The Rise of American Democracy: Jefferson to Lincoln (2005) was awarded the Bancroft Prize, and he has received two Grammy nominations for his writings on music.

"Hofstadter's contribution to our understanding of America's past and its relevance to the present still command attention. The current volume from the Library of America is a testament." —Pop Matters