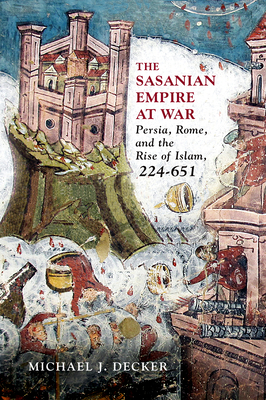 The Sasanian Empire at War: Persia, Rome, and the Rise of Islam, 224–651 is the first comprehensive study in English examining war and society in one of the most important empires in world history: the Persian Empire of 224-651 AD, ruled by the Sasanian clan. At its height the Sasanians governed lands from the Indus River in the east to Egypt and the Mediterranean in the west. Adversaries of Rome, they also faced grave challenges from nomadic powers from Central Asia, notably the Huns and Turks. The Sasanians were able to maintain their empire for hundreds of years through nearly constant warfare, but when their expansion was checked in the north by the Byzantines at Constantinople in 626, and with the Muslim invasions to their south and west beginning in the 630s, the empire could no longer be sustained, and it finally collapsed.

In this book, Michael J. Decker examines Sasanian warfare, including military capabilities, major confrontations, organization and weapons of the Persian army. In addition to providing a comprehensive overview of the conflicts that marked this vital period in the history of Eurasia, The Sasanian Empire at War challenges long cherished notions of the inferiority of Sasanian military capabilities and renders a new image of a sophisticated, confident culture astride the heart of Eurasia at the end of the ancient world and birth of the Silk Road. Persian arms were among the many features of their culture that drew widespread admiration and was one of the keys to the survival of Iranian culture beyond the Arab Conquest and into the present day.

Michael J. Decker earned his PhD from Oxford University. He has worked extensively on the archaeology and history of the Byzantine state in the Middle East and North Africa and over the past twenty years has taught ancient and medieval history at universities around the world. His publications include The Byzantine Art of War.

"In reading Michael J. Decker’s The Sasanian Empire at War: Persia, Rome, and the Rise of Islam, 224-651, I was surprised to see so many place names that I had come to know from covering the recent American war in Iraq. Essentially the Sasanians rose by fighting the Roman Empire along the Tigris and Euphrates Rivers in Mesopotamia. The Persians besieged the Roman garrison in what is now Tikrit, best known nowadays as Saddam Hussein’s hometown. In A.D. 363, the Roman emperor Julian the Apostate defeated a Persian force just outside today’s Falluja, where the Americans fought two long, hard battles in 2004. He was mortally wounded in a subsequent battle near today’s Samarra, a city between Mosul and Baghdad. When I accompanied a U.S. Army patrol on the bank of the Diyala River northeast of Baghdad, I was unaware that the Eastern Roman emperor Heraclius had marched his own army there in 628. In the estimation of Decker, a historian at the University of South Florida, the Sasanians excelled at balancing strategic threats from the west (the declining Roman Empire) and the east (the rise of the Huns and then the Turks). Ultimately what brought them down was an unexpected new foe from the south — Arabic warriors riding under the banner of Islam in the 630s and 640s. I put the book down wondering what unforeseen threat might bring down the United States."—Thomas E. Ricks, New York Times Book Review

“This important book provides a comprehensive analysis of an empire too often overlooked. Based on meticulous scholarship of all extant sources, Decker provides much-needed insight into the Sasanian empire and its critically important role in Middle Eastern history before the spread of Islam. This will be the standard text for years to come.”—William Cummings, Chair of Humanities and Cultural Studies, University of South Florida

“Michael Decker brings us an opportune insight into the military dynamics of the Sasanians. Their empire is central to the understanding of eastern late antiquity, but traditionally portrayed from a Mediterranean perspective as an unfamiliar, external menace. Reality on the ground was of course more complex, as elegantly revealed by Decker. Easy to read and still rigorous, this book is a wonderful contribution to both scholarship and the wider literary market.”—Adriaan De Man, United Arab Emirates University