The Meursault Investigation: A Novel (Paperback) 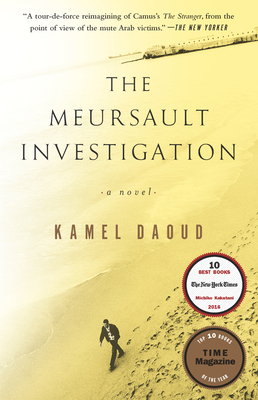 Kamel Daoud is an Algerian journalist who writes honestly enough to have merited a fatwa against his life. In this novel he comes up with the brilliant idea to write a narrative taking Camus' The Stranger as a true premise for his story. The brother of the never named Arab victim in Camus' novel comes to life and with his long suffering mother wants to know who this Meursault was. — From Jeff's Picks

“The Meursault Investigation is a complex and subtle reckoning with the legacy of colonialism and the silences it imposes. Although the novel was conceived in the shadow of Camus' The Stranger, readers realize quickly that it haunts those shadows not because it lacks its own light, but because Daoud wants to plumb the depths of that darkness to tell a story that demands to be heard. I hope everyone listens.”
— Stephen Sparks, Green Apple Books on the Park, San Francisco, CA

“A tour-de-force reimagining of Camus’s The Stranger, from the point of view of the mute Arab victims.” —The New Yorker

He was the brother of “the Arab” killed by the infamous Meursault, the antihero of Camus’s classic novel. Seventy years after that event, Harun, who has lived since childhood in the shadow of his sibling’s memory, refuses to let him remain anonymous: he gives his brother a story and a name—Musa—and describes the events that led to Musa’s casual murder on a dazzlingly sunny beach.

In a bar in Oran, night after night, he ruminates on his solitude, on his broken heart, on his anger with men desperate for a god, and on his disarray when faced with a country that has so disappointed him. A stranger among his own people, he wants to be granted, finally, the right to die.

The Stranger is of course central to Daoud’s story, in which he both endorses and criticizes one of the most famous novels in the world. A worthy complement to its great predecessor, The Meursault Investigation is not only a profound meditation on Arab identity and the disastrous effects of colonialism in Algeria, but also a stunning work of literature in its own right, told in a unique and affecting voice.

Kamel Daoud is an Algerian journalist based in Oran, where he writes for the Quotidien d’Oran—the third largest French-language Algerian newspaper. He contributes a weekly column to Le Point, and his articles have appeared in Libération, Le Monde, Courrier International, and are regularly reprinted around the world. A finalist for the Prix Goncourt, The Meursault Investigation won the Prix François Mauriac and the Prix des Cinq-Continents de la francophonie. International rights to the novel have been sold in twenty countries. A dramatic adaptation of The Meursault Investigation will be performed at the 2015 Festival d’Avignon, and a feature film is slated for release in 2017.

"[A] rich and inventive new novel...so convincing and so satisfying that we no longer think of the original story as the truth, but rather come to question it...[a] letter of love rebellion and despair for Algeria." —The New York Times Book Review

“Nothing…prepared me for [Daoud’s] first novel, The Meursault Investigation, a thrilling retelling of Albert Camus’s 1942 classic, The Stranger, from the perspective of the brother of the Arab killed by Meursault, Camus’s antihero. The novel...not only breathes new life into The Stranger; it also offers a bracing critique of postcolonial Algeria... The premise is ingenious: that The Stranger, about the murder of an unnamed Arab on an Algiers beach, was a true story…Meursault is less a critique of The Stranger than its postcolonial sequel.” —The New York Times Magazine

"[A] stunning debut novel…[A]n intricately layered tale that not only makes us reassess Camus’s novel but also nudges us into a contemplation of Algeria’s history and current religious politics; colonialism and postcolonialism; and the ways in which language and perspective can radically alter a seemingly simple story and the social and philosophical shadows it casts backward and forward.” —Michiko Kakutani, The New York Times

“A tour-de-force reimagining of Camus’s The Stranger, from the point of view of the mute Arab victims.” —The New Yorker

“Daoud has said that his novel is an homage to Albert Camus’s The Stranger, but it reads more like a rebuke...Where Camus’s godless prose is coolly mathematical in its ratio of words to meaning, Daoud’s work conducts waves of warmth. The sand and the sea and the sky and the stars, which, for Camus, seem to negate life rather than affirm it, are, for Daoud, vital witnesses and participants in his existence.” —NewYorker.com

"Kamel Daoud's remarkable debut novel isn't simply a postcolonial reimagining but an allegory of his own country and time...[The Meursault Investigation] has the magnetism of its forebear, but its themes of voicelessness and vengeance feel utterly present-day." —Vogue

“[A] scorching debut novel that is sure to become an essential companion to Camus’s masterpiece…The Meursault Investigation...is a biting, profound response to French colonialism. It is also a lamentation for a modern Algeria gripped by pious fundamentalism…The book’s brilliance lies in the gradual way Mr. Daoud reveals Harun to be a perfect mirror: the tragic double of Meursault/Camus… Daoud’s prose is propulsive and charged. The pages glitter with memorable phrases. This brave book is a vertiginous response to a century of trauma.” —The Economist

“[A] mesmerizing first novel...The Meursault Investigation has an inescapable topical resonance, given the role played by political Islam in Algeria in recent times...an absorbing, independent story and a shrewd critique of a country trapped in history’s time warp.” —The Wall Street Journal

"Daoud neither rejects Camus and his colonial legacy outright nor accepts his work uncritically. His resulting meditations are rich and thought-provoking, both for Algerian and for Western readers." —The New York Review of Books

"More than a mere reimagining of the primary text, The Meursault Investigation is layered with allusions to Camus’s life and his other work." —The Washington Post

"Daoud's book stands Camus on his head...What makes Daoud's book so good is that, steeped in independent thinking, it offers an illuminating, if controversial portrait of today's Algeria." —Fresh Air, NPR

“Give Kamel Daoud credit for audacity. In his debut novel, The Meursault Investigation, the Algerian journalist goes head-to-head with a pillar of 20th century literature…The true measure of the novel…is that Daoud realizes critique is not enough…the power—and, yes, the beauty—of The Meursault Investigation is that it moves…to an unexpected integration in which we recognize that for all the intractable divides of faith or nationality, our humanity remains (how can it not?) essentially the same.” —The Los Angeles Times

"Provocative...What begins as a reproach to The Stranger for marginalizing 'the second most important character in the book' becomes a lament for Algeria's long battle for independence, first from French colonists and subsequently from authoritarian Islamism." —NPR

"Remarkable...[Kamel Daoud's] core idea is of startling ingenuity...Daoud...takes Albert Camus’s classic novel, The Stranger—or more precisely the 'majestically nonchalant' murder of an Arab at the heart of it—and turns that Arab into a human being rather than the voiceless, characterless, nameless object of a 'philosophical crime' by a Frenchman called Meursault on an Algiers beach 20 years before the culmination of Algeria’s brutal war of independence." —The International New York Times

"With The Meursault Investigation, [Kamel] Daoud has achieved the near impossible: a retelling of a classic that consistently measures up." —San Francisco Gate

"For its incandescence, its precision of phrase and description, and its cross-cultural significance, The Meursault Investigation is an instant classic." —The Guardian (UK)

"[Kamel] Daoud's book is energetic and garrulous...he has taken a western classic and used it to illuminate the Algerian mind." —The Sunday Times (UK)

"The Meursault Investigation is a subversive retelling of Albert Camus’s The Outsider...but there is far more to his book than a clever deconstruction of a canonical novel...[it is] a penetrating inquiry into loss itself...It is a testament to Daoud’s subtle, profound talent that his story works both as a novelistic response to Camus and as a highly original story in its own right. The Meursault Investigation is perhaps the most important novel to emerge out of the Middle East in recent memory, and its concerns could not be more immediate. " —Financial Times

"In just 160 spare pages, Daoud recounts–and challenges–not only the original narrative of Meursualt, the anti-hero created by Camus, but through bestowing a name, family, legacy, to a forgotten victim, he sharply deconstructs the troubled decades of French-Algerian history, explores the erasure of identity and the legacy of colonialism, examines the consequences of violent independence and the ensuing, ongoing reconstruction of a national identity. To begin to understand all that is surely worth an investment of just a few hours of reading." —The Christian Science Monitor

"In...The Meursault Investigation, Mr. Daoud corrects, or 'writes back,' to Camus’ [The Stranger] from the point of view of the dead Arab’s brother...The Meursault Investigation invokes the language, images and plot of The Stranger and adapts them to the Algerian context...Mr. Daoud’s writing is like a live wire flowing with anger. It sparks fresh insights, raises important questions about the links between literature and politics, and challenges us to view the literary past and political present in new ways.” —The Pittsburgh Post Gazette

"Quirky—and compelling—it is a meditation by turns passionate, cynical, and angry on power, freedom, and the indifference of the universe." —Philly.com

“In the hands of Algerian journalist Kamel Daoud, The Stranger has become the springboard for another novel that serves as both homage and rebuke to Camus’ masterpiece…It is a brilliant, infinitely rich tour de force of the imagination that never mentions Camus by name but gives Meursault’s victim not only a name–Musa–but a history, a family and a would-be future…Its originality of vision carries the book a long way toward mastery of its form…The Meursault Investigation stirs our imagination, showing that literary classics are never finished." —The Wichita Eagle

“Humor erupts in The Meursault Investigation every time there is tragedy, and this recipe for the Algerian absurd gives Daoud’s book its literary sting…For Daoud, the novel is above all an opportunity to engage with the legacy of Algerian independence, half a century old, and to ask what the country has made of its liberation. Daoud turns the novel into an aesthetic platform for his particular sense of the Algerian absurd: the tyranny of official religion and an asphyxiating national history.” —The Nation

"The nameless Arab victim of Albert Camus's The Stranger receives a biography and a name in this thoughtful, controversial rejoinder from the other side of the colonial question...Fiction with a strong moral edge, offering a Rashomon-like response to a classic novel." —Kirkus Reviews

"[A] blazing, brilliantly conceived debut novel...An eye-opening, humbling read, splendid whether or not you know and love the original." —Library Journal

“In The Meursault Investigation, Kamel Daoud takes us to a territory that is clearly his own. I loved the unexpected depth to the restorative nature of the text, which enthralls the readers all the more, especially when they are familiar with Albert Camus’s The Stranger.  It is a wonderful novel and I enjoyed reading it.” —Nuruddin Farah, award-winning author of Hiding in Plain Sight

“A superb novel…In the future, The Stranger and The Meursault Investigation will be read side by side.” —Le Monde des livres

“A breathtaking and effectively realized novel. The Stranger becomes a palindrome… The Meursault Investigation approaches the incredible, in that it reverses the perspective and point of view not without an emphatic ferociousness, all while playing with the prose and perspective of The Stranger.” —La Croix

“A remarkable homage to its model.” —Le Nouvel observateur