Point of Dreams: A Novel of Astreiant (Paperback) 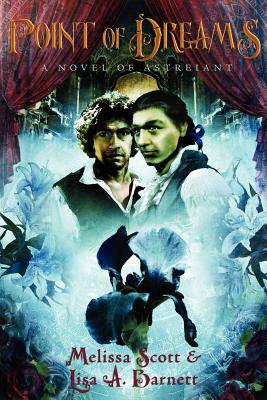 This is book number 3 in the Novel of Astreiant series.

The city of Astreiant has gone crazy with enthusiasm for a new play, "The Drowned Island," a lurid farrago of melodrama and innuendo. Pointsman Nicolas Rathe is not amused, however, at a real dead body on stage and must investigate. A string of murders follow, perhaps related to the politically important masque that is to play on that same stage. Rathe must once again recruit the help of his lover, former soldier Philip Eslingen, whose knowledge of actors and the stage, and of the depths of human perversity and violence, blends well with Rathe's own hard-won experience with human greed and magical mayhem. Their task is complicated by the season, for it is the time of year when the spirits of the dead haunt the city and influence everyone, and also by the change in their relationship when the loss of Philip's job forces him to move in with Nicolas. Mystery, political intrigue, floral magic, astrology, and romance--both theatrical and personal--combine to make this a compelling read. A winner of the Lambda Literary Award for Best LGBT Speculative Fiction.