Alexander Vvedensky: An Invitation for Me to Think (NYRB Poets) (Paperback) 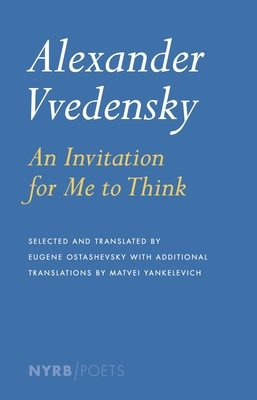 “Pussy Riot are Vvedensky's disciples and his heirs.
Katya, Masha, and I are in jail but I don’t consider that we’ve been defeated.... According to the official report, Alexander Vvedensky died on December 20, 1941. We don’t know the cause, whether it was dysentery in the train after his arrest or a bullet from a guard. It was somewhere on the railway line between Voronezh and Kazan. His principle of ‘bad rhythm’ is our own. He wrote: ‘It happens that two rhythms will come into your head, a good one and a bad one and I choose the bad one. It will be the right one.’ ... It is believed that the OBERIU dissidents are dead, but they live on. They are persecuted but they do not die.”
— Pussy Riot [Nadezhda Tolokonnikova’s closing statement at their
trial in August 2012]

“I raise[d] my hand against concepts,” wrote Alexander Vvedensky, “I enacted a poetic critique of reason.” This weirdly and wonderfully philosophical poet was born in 1904, grew up in the midst of war and revolution, and reached his artistic maturity as Stalin was twisting the meaning of words in grotesque and lethal ways. Vvedensky—with Daniil Kharms the major figure in the short–lived underground avant-garde group OBERIU (a neologism for “the union for real art”)—responded with a poetry that explodes stable meaning into shimmering streams of provocation and invention. A Vvedensky poem is like a crazy party full of theater, film, magic tricks, jugglery, and feasting. Curious characters appear and disappear, euphoria keeps company with despair, outrageous assertions lead to epic shouting matches, and perhaps it all breaks off with one lonely person singing a song.

A Vvedensky poem doesn’t make a statement. It is an event. Vvedensky’s poetry was  unpublishable during his lifetime—he made a living as a writer for children before dying under arrest in 1942—and he remains the least known of the great twentieth-century Russian poets. This is his first book to appear in English. The translations by Eugene Ostashevsky and Matvei Yankelevich, outstanding poets in their own right, are as astonishingly alert and alive as the originals.

Alexander Vvedensky (1904–1941) was born into the liberal intelligentsia of St. Petersburg and grew up in the midst of war and revolution, reaching artistic maturity just as Stalin consolidated control over Russia. After attending a progressive high school, Vvedensky spent a year working at the State Institute of Artistic Culture (GINKhUK) as a researcher in a lab devoted to Futurist abstract poetry. Along with Daniil Kharms, he then became a major figure in the short-lived underground avant-garde group OBERIU (a neologism for “the union for real art”). Unable to publish his poetry—by the 1930s there was no tolerance in the USSR for work of such shimmering invention and provocation—Vvedensky made a living as a writer of children’s literature. In 1931 he was arrested for his so-called counterrevolutionary literary activities, interrogated, and sentenced to three years of internal exile. He was detained again in 1941, and on February 2 he died of pleurisy on a prison train, leaving behind his wife and four-year-old son. Though much of Vvedensky’s work has been lost, what remains has established him as one
of the most influential Russian poets of the twentieth century.

Eugene Ostashevsky is the author of the poetry collections The Life and Opinions of DJ Spinoza and Iterature, both published by Ugly Duckling Presse. He is the editor of OBERIU: An Anthology of Russian Absurdism, the first collection of writings by Vvedensky and friends in English translation. Ostashevsky teaches in the liberal studies program at New York University.

Matvei Yankelevich is the author of the poetry collection Alpha Donut (United Artists Books) and a novella in fragments, Boris by the Sea (Octopus Books). His translations of Daniil Kharms were collected in Today I Wrote Nothing: The Selected Writings of Daniil Kharms (Overlook/Ardis). He edits the Eastern European Poets Series at Ugly Duckling Presse.

"…it's high time that more readers pick up on [Vvedensky's] work to break language, to crush understanding so that what is beneath and beyond it can smuggle its miracle into our event-hemorrhaging lives.” —Asymptote Journal

“Unlike the Symbolists, his aim is neither to create an aesthetic paradise nor to suggest or build a bridge to another world—Vvedensky’s is an aesthetics of martyred aesthetics, of not knowing, of the defeat of ‘poetry’ in the service of truth.... His poetic sensibility combines the Russian Symbolist concern for transcendence, God, and ‘other worlds,’ with the Futurist orientation toward syntactical and semantic deformations that draw attention to the artifices of language.” — Thomas Epstein, The New Arcadia Review

Praise for OBERiU: An Anthology of Russian Absurdism, edited by Eugene Ostashevsky:

"Vvedensky’s poems sear.... Ruminations on faith and loss abound, but there are few
more churning, lacerating and willfully beautiful works in Eastern literature than
the prose poem “Frother,” in which three sons hover and cavort around their dying
father, trying to ascertain the meaning of a mysterious word and a mysterious truth."—The Nation

"[OBERIU] mounted a challenge in the late 1920s and 30s to 'worldly logic' by questioning and confusing the most basic categories through which the world may be rendered coherent and transformed into narrative. They did so by writing subversive poems and stories, while 'trusting in neither thoughts nor words' (Alexander Vvedensky). They practised a kind of silence through words, wearing various comic masks while pointing to inexpressible realities." —The Times Literary Supplement

"The work of Oberiu is as relevant to our moment as when it was written." —The Believer

"It's about time . . . the Oberiu . . . became a household name like the Surrealists, Dadaists and all the rest." —The Brooklyn Rail

"Oberiu is as relevant today as ever." —Bookforum

"For anyone intersted in Soviet literature, this book fills an enormous gap. It also presents some beautiful, heartbreaking poetry." —PW Annex

"These poems do what solid poems should.  They stand against time."  — Peter Moysaenko, bomblog

"The OBERIU writers are a revelation, an aspect of Russian modernism in the early Soviet period that has been largely invisible to readers in English.”  —Robert Hass

“OBERIU, sometimes called Russia's last avant-garde, is one of the most intriguing--and little known--movements of the years before World War II. The absurdist poets at its center—Alexander Vvedensky, Daniil Kharms, and Nikolai Zabolotsky—belonged to the first generation of writers to come of age after the October Revolution . . .  Less interested in coining neologisms than in destroying the protocols of semantic coherence and linguistic realism, these poets have produced a series of inventive, free-wheeling, and often hilarious poetic texts in a variety of forms and genres.” —Marjorie Perloff

"Skirting oblivion, impossibly present, Vvedensky now even exists in English where he rubs shoulders with contemporaries he never knew, echoing the metaphysical side of Laura Riding, the phenomenological bent of Gertrude Stein, and the grammatical play and befuddling repetition of both." —Matvei Yankelvich, Poetry Daily