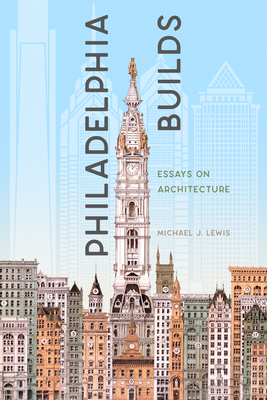 "Michael Lewis deploys his gifts as a storyteller to convey the ideas, aspirations, vanities and struggles that gave form to Philadelphia's most important buildings. Written with ferocious passion and deep scholarship, these architectural histories frequently charmed me, occasionally provoked me, and ultimately left me with a richer understanding of the city I thought I already knew."--Inga Saffron, architecture critic, Philadelphia Inquirer, and author of Becoming Philadelphia In Philadelphia Builds, architecture critic Michael J. Lewis explains why Philadelphia has produced so many extraordinary architects, including Louis Kahn, Frank Furness, and Robert Venturi. Lewis has written about the architecture of his native city for over three decades, and Philadelphia Builds brings together twenty-two of his best essays―including one about Kahn's little-known project to design a memorial for Vladimir Lenin and another which is the first substantial profile of Willis G. Hale, cult hero of Philadelphia hipsters. Other essays treat William Penn's plan for his new Quaker city, the fierce competitions that gave the city its greatest civic monuments, and also contemporary buildings such as the Barnes Foundation. Richly illustrated with drawings and photographs throughout, Philadelphia Builds is an engaging account of the people and forces that shaped the city from the 1700s to the present day. Includes 120 b/w photographs and images.

Michael J. Lewis is the author of nine books on art and architecture, including Frank Furness: Architecture and the Violent Mind, The Gothic Revival, and City of Refuge. He is the architecture critic at the Wall Street Journal, and his essays and reviews have been published in the New York Times, Commentary, New Criterion, and Architectural Record, among others. Lewis is the Faison-Pierson-Stoddard Professor of Art at Williams College, and divides his time between Williamstown, MA and Philadelphia.