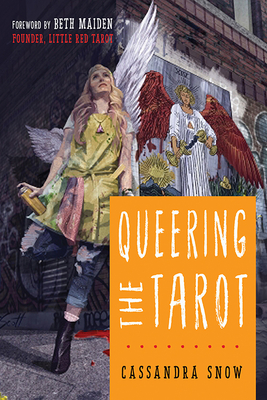 Tarot is best used as a tool for self-discovery, healing, growth, empowerment, and liberation. Tarot archetypes provide the reader with a window into present circumstances and future potential. But what if that window only opened up on a world that was white, European, and heterosexual? The interpretations of the tarot that have been passed down through tradition presuppose a commonality and normalcy among humanity. At the root of card meanings are archetypes that we accept without questioning. But at what point do archetypes become stereotypes?

Humanity is diverse--culturally, spiritually, sexually. Tarot has the power to serve a greater population, with the right keys to unlock the tarot's deeper meanings. In Queering the Tarot, Cassandra Snow deconstructs the meanings of the 78 cards explaining the ways in which each card might be interpreted against the norm. Queering the Tarot explores themes of sexuality, coming out, gender and gender-queering, sources of oppression and empowerment, and many other topics especially familiar to not-straight folks. Cassandra's identity-based approach speaks directly to those whose identity is either up in the air or consuming the forefront of their consciousness. It also speaks to those struggling with mental illness or the effects of trauma, all seekers looking for personal affirmation that who they are is okay.

Cassandra Snow is a professional tarot card reader who teaches Queering the Tarot and Tarot for Beginners classes and coaches new and intermediate readers. She also runs Gadfly Theatre Productions, a queer and feminist theater company. She lives in Minneapolis, Minnesota.
Beth Maiden is the founder of Little Red Tarot.

“Queering the Tarot was a feature on the Little Red Tarot blog. Taking the tarot cards that we all love, and peeling them back to their bones. From there, Cassandra Snow builds the cards a new form. One that speaks to everyone regardless of their gender identity, sexuality or gender expression. I have seen queer tarot cards save people's lives. I have seen the impact that diversity and representation have in my community. I am delighted that this book exists, and encourage everyone - queer, straight or otherwise -- to pick it up.” —Melissa Cynova, author of Kitchen Table Tarot
— Melissa Cynova

“Learning to apply the wisdom embedded in each tarot card to specific situations is always challenge. The challenge is heightened when your lifestyle may not be considered mainstream. Cassandra Snow leads us on a journey through the tarot that explores, acknowledges, and honors, the experiences of non-straight and/or non-cisgendered folks. Her insights are valuable for both queer readers and for readers with queer clients.” --Barbara Moore, author of Steampunk Tarot, Llewellyn’s Classic Tarot, Your Tarot Your Way, www.tarotshaman.com
— Barbara Moore

"In Queering the Tarot, Cassandra Snow opens up the world of tarot and makes it inclusive for the LGBTQ community and other marginalized folk. I think this may be one of the most important tarot books out today. It gives much needed representation and respect to a whole slice of the population that has been left out due to tarot’s tendency to focus on white, cisgender, heteronormative. Queering the Tarot is a wonderful book who’s time has come. It belongs on every serious tarot reader’s shelf." —Theresa Reed, author of The Tarot Coloring Book and co-author of Tarot For Troubled Times
— Theresa Reed

"Queering the Tarot doesn't just bring the Tarot out of the closet. It dresses it up in drag (both queen and king) to show it off. This is a book that isn't afraid to challenge the binary gender paradigm from all angles. It doesn't matter if you are queer, straight, or somewhere else on the spectrum because Cassandra Snow unflinchingly casts aside the heteronormative dialogue to reveal a rich, nuanced view of this divinatory art. I was pleased to see the Urban Tarot used in the images as well. It is the perfect "gender-queer" deck for this book. It is truly a keeper for anyone who wishes to broaden their Tarot practice personally. I think it should be required for all professionals who want to be in touch and in tune with our diverse, beautiful population." --Arwen Lynch-Poe, Editor/Publisher at The Cartomancer
— Arwen Lynch-Poe

"Queering the Tarot is an indispensable book in the modern re-workings of the 600-year-old images, symbols, and stories--indispensable not just for LGBTQQIPA2P+ people, but for anyone who wants to see how the Tarot can expand and open to the world. “ --Rachel Pollack, author of Seventy Eight Degrees of Wisdom
— Rachel Pollack

"As a straight, middle-class Baby Boomer, I admit to being slightly uncomfortable with the word “queer”. It is also true that I have made up my mind not to die of mental rigidity. So a few years back, I began consciously trying on other people’s perspectives and I have come to understand that the LBGTQ+ community speaks the word clearly as a powerful badge of honor. For the moment, as Beth Maiden points out in her brilliant foreword to this book, the queer experience is substantially different from the hetero experience. Both from that perspective, and from the perspective of a long time student of all things tarot, I herald the release of this book and the new dimensions that it adds to the magical symbolism of the cards. In the page-and-a-half “Word” that follows Maiden’s “Foreword”, Cassandra Snow says that the word “queer” has come to mean the intention to create a community where “others” (all those who need a safer space) are welcomed with open arms. I can think of no better definition of the symbolism of the tarot. Snow is asking The Fool to “walk in another man’s shoes” along the path to enlightenment. The lessons learned are invaluable." --Anna Jedrziewski, Retailing Insights, May/June 2019
— Anna Jedrziewski

"Tarot, as practiced by modern readers, is an exploration into one's psyche and life experience. Snow has blogged for years on the website Little Red Tarot about reinterpreting the tarot to be more inclusive of the LGBTQ community. Expanding these earlier writings and using the images of the Urban Tarot deck, they have created a resource that speaks to queer culture and the inherent issues of difference. Although the Urban Tarot deck is based on Aleister Crowley's Thoth Tarot (which diverges from decks based on the Rider-Waite-Smith cards), traditional tarot readers will appreciate this perceptive take on each of the major and minor arcana. The emphasis of Snow's interpretations becomes welcoming, relatable, and compassionate to those in the gender nonconforming community, as she deals with concerns previously ignored or judged. VERDICT Snow creates a safe divinatory space for a community likely to have suffered abuse or trauma, or who don't relate to the dominant cis culture in an expanding and affirming read for all levels of tarot enthusiasts." —Library Journal, Janet Tapper, Univ. of Western States Lib., Portland, OR
— Janet Tapper