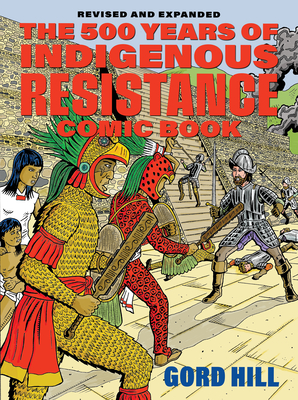 When it was first published in 2010, The 500 Years of Resistance Comic Book was heralded as a groundbreaking illustrated history of Indigenous activism and resistance in the Americas over the previous 500 years, from contact to present day. Eleven years later, author and artist Gord Hill has revised and expanded the book, which is now available in color for the first time. The 500 Years of Resistance Comic Book powerfully portrays flashpoints in history when Indigenous peoples have risen up and fought back against colonizers and other oppressors. Events depicted include the the Spanish conquest of the Aztec, Mayan and Inca empires; the 1680 Pueblo Revolt in New Mexico; the Battle of Wounded Knee in 1890; the resistance of the Great Plains peoples in the 19th century; and more recently, the Idle No More protests supporting Indigenous sovereignty and rights in 2012 and 2013, and the resistance to the Dakota Access Pipeline in 2016. With strong, plain language and evocative illustrations, this revised and expanded edition of The 500 Years of Resistance Comic Book reveals the tenacity and perseverance of Indigenous peoples as they endured 500-plus years of genocide, massacre, torture, rape, displacement, and assimilation: a necessary antidote to conventional histories of the Americas. The book includes a foreword by Pamela Palmater, a Mi'kmaq lawyer, professor, and political commentator.

Gord Hill is a member of the Kwakwaka'wakw nation and the author of The 500 Years of Resistance Comic Book, The Anti-Capitalist Resistance Comic Book, and The Antifa Comic Book. He has been involved in Indigenous peoples' and anti-globalization movements since 1990. Pamela Palmater is a Mi'kmaw citizen and member of the Eel River Bar First Nation in northern New Brunswick. She has been a practicing lawyer for 22 years and is currently a Professor and the Chair in Indigenous Governance at Ryerson University.