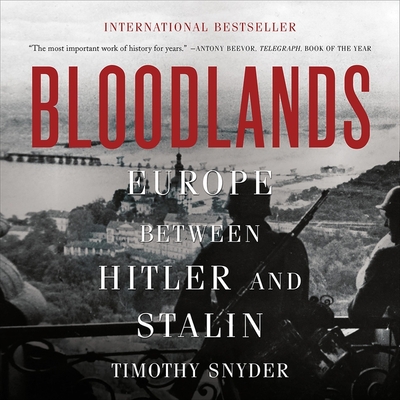 By Timothy Snyder, Ralph Cosham (Read by)
$123.99
This item is out of stock with our warehouse. Some recently published books may be in stock @ Room. Email to check.

From the bestselling author of On Tyranny, the definitive history of Hitler's and Stalin's wars against the civilians of Europe in World War TwoAmericans call the Second World War The Good War.But before it even began, America's wartime ally Josef Stalin had killed millions of his own citizens--and kept killing them during and after the war. Before Hitler was finally defeated, he had murdered six million Jews and nearly as many other Europeans. At war's end, both the German and the Soviet killing sites fell behind the iron curtain, leaving the history of mass killing in darkness. Bloodlands is a new kind of European history, presenting the mass murders committed by the Nazi and Stalinist regimes as two aspects of a single history, in the time and place where they occurred: between Germany and Russia, when Hitler and Stalin both held power. Assiduously researched, deeply humane, and utterly definitive, Bloodlands will be required reading for anyone seeking to understand the central tragedy of modern history. Bloodlands won twelve awards including the Emerson Prize in the Humanities, a Literature Award from the American Academy of Arts and Letters, the Leipzig Award for European Understanding, and the Hannah Arendt Prize in Political Thought. It has been translated into more than thirty languages, was named to twelve book-of-the-year lists, and was a bestseller in six countries.