Hawking Hawking: The Selling of a Scientific Celebrity (Hardcover) 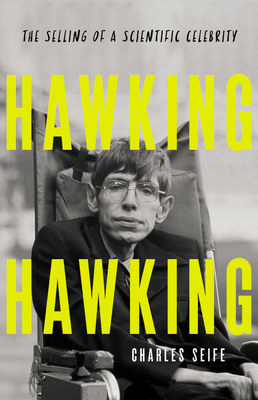 Stephen Hawking was widely recognized as the world's best physicist and even the most brilliant man alive–but what if his true talent was self-promotion?

When Stephen Hawking died, he was widely recognized as the world's best physicist, and even its smartest person.

In Hawking Hawking, science journalist Charles Seife explores how Stephen Hawking came to be thought of as humanity's greatest genius. Hawking spent his career grappling with deep questions in physics, but his renown didn't rest on his science. He was a master of self-promotion, hosting parties for time travelers, declaring victory over problems he had not solved, and wooing billionaires. In a wheelchair and physically dependent on a cadre of devotees, Hawking still managed to captivate the people around him—and use them for his own purposes.

A brilliant exposé and powerful biography, Hawking Hawking uncovers the authentic Hawking buried underneath the fake. It is the story of a man whose brilliance in physics was matched by his genius for building his own myth.

Charles Seife is a professor of journalism at NYU's Arthur L. Carter Journalism Institute and has been writing about science and mathematics for nearly three decades. The author of numerous books, including the bestselling Zero, he lives in New York City.

“Hawking Hawking is deeply researched and richly sourced… Seife succeeds in serving up something of the flavor of those difficult and rather esoteric ideas, which are the heart of Hawking’s contribution to science, in a way that won’t give general readers indigestion… Seife has performed an important service by documenting Stephen Hawking’s life as it actually happened.”—Frank Wilczek, New York Times

“Charles Seife, a biographer braver than most, begins by staring down the puppet.  His conceit is to tell Hawking’s story backwards, peeling away the layers of celebrity and incapacity to reveal the wounded human within.  It’s a tricksy idea that works so well you wonder why no one thought of it before.”
—Simon Ings, The Spectator US

"Seife’s sharp, irreverent biography posits the revered physicist as essentially a showman – a media creation sold to a public hungry for both inspirational narratives (“a being of pure intellect”) and for the salacious tidbits regularly coughed up about him in the tabloids (affairs, abuse, strip clubs). Among other withering allegations, Seife convincingly argues that Hawking’s books and “discoveries” following his celebrity- and fortune-making A Brief History of Time were, essentially, rehashes."—Emily Donaldson, The Globe and Mail

“[Seife] aims to find the human lost inside the myth, so he must first chip away a gaudy shell….The metamorphosis at the book’s heart is, when it comes, dramatic.”—James Gleick, New York Review of Books

"The best biography yet published of the most famous scientist of recent decades. ... A successful
attempt to rescue the complicated scientist from fame’s myriad distortions. ... The book humanizes Hawkingbut reveals a tragic core to his celebrity."—Declan Fahy, Science

“Hawking Hawking: The Selling of a Scientific Celebrity, by Charles Seife, is an unvarnished look at the cosmologist and black-hole expert Stephen Hawking, who died in 2018. The book, rich in reporting about Dr. Hawking’s breakthroughs and his life (and written in reverse chronological order), seeks to separate the man and his science from the Einstein-like aura of sagacity that he let envelope his public persona.”—Dennis Overbye, New York Times

"Veteran science writer Charles Seife’s warts-and-all biography doesn’t hold back from exploring Hawking’s less appealing sides. This is long overdue—not so much because Hawking needs cutting down to size, but because he needs to be rehumanised. ... Hawking’s life is worth celebrating, but if we make it a myth then it becomes just a story onto which we can project our anxieties and fantasies."—Philip Ball, Prospect Magazine

“In Hawking Hawking, Seife provides a lively survey of Hawking’s career….His purpose is not to reveal Stephen Hawking the human being: Hawking’s other biographers…have done that with varying degrees of success, although Seife builds that portrait out with fresh interviews and research. But he’s really in pursuit of a more intriguing quarry: Hawking’s relationship with his public, and the source of his celebrity….Seife is a clear interpreter of Hawking’s physics, but he is also determined to be a cool judge of Hawking’s career.”—Samanth Subramanian, The New Republic

"Seife’s focus is not on Hawking as a powerful scientist but, rather, on Hawking as a dazzling public image, a cultural icon....The outrage this book will generate among Hawking’s admirers will pique the interest of the curious."—Bryce Christensen, Booklist

"[A] penetrating dissection of the physicist’s celebrity."—Andrew Robinson, Nature

“It is true that publishers in particular took advantage of Stephen Hawking’s tragic situation as the victim of a progressive neurological condition—amyotrophic lateral sclerosis….But if this was exploitation, it was the exploitation of someone who was only too willing to be exploited. [Seife] has certainly refrained from doing a hatchet-job on Hawking, and he cannot be accused either of cheap sensationalism.”—Anthony Daniels, The New Criterion

“[An] engrossing, sometimes unsettling account....The author’s excellent explanation of Hawking’s science makes this a top-notch biography of a significant scientific figure, but Seife also produces a uniquely disturbing portrait of deliberate mythmaking....An unflattering yet outstanding biography of a giant of 20th-century physics.”—Kirkus

"Seife puts Hawking's scientific contributions into context, and looks behind the inspiring yet tragic tale of a genius trapped inside a useless body. A much needed book."—Sabine Hossenfelder, author of Lost in Math

“If you have any interest at all in Hawking’s story, you owe it to yourself to read this book. It’s a rich and thoughtful examination of his life and work, pushing aside the myth and bringing out the much more interesting reality behind it.”
—Peter Woit, Not Even Wrong