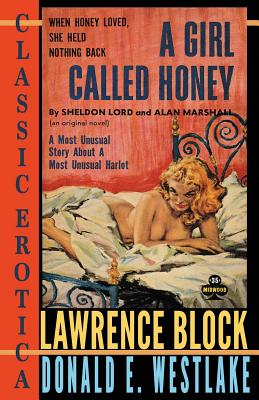 Here you go-the first collaborative effort for Sheldon Lord and Alan Marshall...with cover art by the great Paul Rader When Don Westlake and I were starting out as writers, we both served an apprenticeship writing erotic novels for Harry Shorten at Midwood Books and Bill Hamling at Nightstand. (I was Sheldon Lord for Midwood and Andrew Shaw for Nightstand, while Don was Alan Marshall for both publishers. Note though that the presence of either name upon a book is no guarantee that one of us wrote it. Both of us made arrangements whereby lesser writers would submit works under our names-and I know it's hard to believe that any writers were less than we were back then, but it's true.)Well. We'd become friends in the summer of 1959, while we were living a few blocks away from each other in midtown Manhattan. I was at the Hotel Rio, on West 47th between Sixth and Seventh Avenues, and Don was a block south and several blocks west of me. Then I moved back to my parents' house in Buffalo, and Don and his wife and kid moved to Canarsie, and we wrote letters back and forth.And at one point we decided it might be fun to do a novel together. Not by thinking it out and talking through it and, you know, collaborating in a serious artistic manner. Our method was simpler. One of us would write a chapter, and then the other would write a chapter to come after it, and back and forth, like that, until we had a book.It worked, and by God it was fun. The first of our efforts was A GIRL CALLED HONEY, and it started when I wrote a chapter and sent it to Don. And so on, and we left each other cliffhangers and threw each other's characters off those cliffs, and we stopped when we had a book, and sent it to Henry Morrison who sent it to Harry Shorten. We put both our names on the book, our pen names that is to say, and that's how Harry published it: by Sheldon Lord and Alan Marshall. And he included our dedication: "To Don Westlake and Larry Block, who introduced us."It was so much fun that we did it again. This time Don wrote the first chapter, and I wrote the second. Was I still in Buffalo, and did we still send the chapters through the mail? Damned if I can remember. I think I may have been in New York by then, living with my first wife on West 69th Street. But maybe not, and what does it matter? We finished the book, we sent it in, Midwood published it, and we shared the advance, which was probably $600 for A GIRL CALLED HONEY, but may have escalated to $750 by the time we did SO WILLING. So each of us wound up with either $300 or $375 for our trouble, and that's not a lot of money nowadays, and it wasn't a lot of money in 1960 either, but neither was it a lot of trouble.Damn, those were good days.We did a third novel in collaboration, SIN HELLCAT, and I think it may have been the best of the three-but we didn't get to put a joint byline on it. Well, we did-but someone at Nightstand felt free to change it, dropping Alan Marshall from the "by Alan Marshall and Andrew Shaw" byline we'd supplied. Much the same thing happened to CIRCLE OF SINNERS, my collaboration for Nightstand with Hal Dresner; "By Andrew Shaw and Don Holliday" is what we tagged it, and this time it was Andrew Shaw who got bumped.Never mind. Here's the book that started it all, A GIRL CALLED HONEY-and if reading the saga of Honor Mercy Bane brings you a small fraction of the fun we had writing it, you'll be back right away to scoop up SO WILLING and SIN HELLCAT.