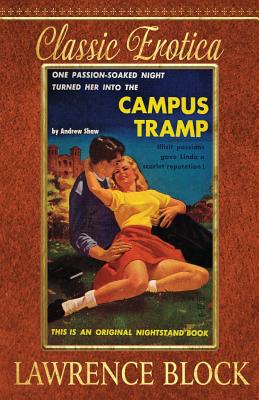 There's a song they used to sing at Antioch College, and it went something like this: "She was just a little freshmanVictim of Admission's whimThen she met an upperclassman-we won't name him-And she had a child by him."Now he's off in New York CityRescued by the co-op planWhile she walks the streets of Yellow Springs, Ohio, Looking for another man."Ah, they don't write 'em like that anymore, and it's not hard to see why. And the sad story recounted in the song is not entirely unlike that of Linda Shepard, titular (so to speak) heroine of CAMPUS TRAMP.The story of the book may be more interesting than the story told in the book. I wrote it in July of 1959, at the Hotel Rio on West 47th Street in New York. I'd just arrived from, yes, Yellow Springs, having spent a year writing books for Harry Shorten, editing the college newspaper, and giving short shrift to my academic studies. (This was my third year at Antioch. I was there for two years, took a year off to work at a literary agency, and then came back, only to discover that, having seen Paree, you couldn't keep me down on the farm. I tried to drop out during the first semester, got manipulated into staying by my parents, and somehow finished the year. Now I was in New York, where I was to spend the summer writing, before returning for what was supposed to be my last year of school.)Well. My agent came up with an assignment. William Hamling, publisher of science fiction and Rogue Magazine, had decided to initiate a line of erotic novels similar to what I'd been writing for Midwood. Could I write one?I could and did, and thought it might be amusing to use Antioch as a setting, and to choose the characters' surnames from the buildings and dormitory units on the Antioch campus. I picked the title CAMPUS TRAMP and sent it off, and they liked it well enough in Hamlingville (that would be Evanston, Illinois, IIRC) to ask for more.Not long after I'd finished the book, I got a letter from Yellow Springs. The Student Personnel Committee, having taken a long look at my academic performance, advised me of their decision that I might be happier elsewhere. I thought this was very perceptive of them, that I would indeed be happier almost anywhere else, and the passive-aggressive lout I was at the time found this an ideal resolution to a situation I seemed incapable of resolving on my own. Their letter had left the door slightly ajar, if not wide open; I sensed I could talk my way back in, but why?Then CAMPUS TRAMP came out, and a copy or two made it all the way to Yellow Springs, and a legend sprang up. I'd written the book as payback, it was said, a way to revenge myself upon the school that had expelled me. Now when I'd written CAMPUS TRAMP I'd still thought I was to return in the fall. And I was if anything profoundly grateful to the school for having cut the umbilical cord and sent me out into the world. No end of people knew better, even as they were sure they knew who the models were for the various characters-but that happens all the time. But never mind. One recalls the newspaperman's line from THE MAN WHO SHOT LIBERTY VALANCE: "When the legend becomes fact, print the legend "Foir years I wondered who painted the cover, and recently learned it was one Harold W. McCauley. If he himself wasn't familiar with the college, he must have had coaching; that's a remarkably accurate representation of Antioch's Main Building, towers and all. Copies of the book commanded high prices at Antioch Senior Sales over the years, I've been assured, and Christian Feuerstein used to perform inspired readings of the text at what I can but assume were memorable occasions. I just wish someone had thought to hire her to do the audioboo.