A Strange Kind of Love (Paperback) 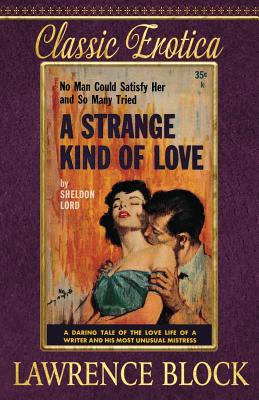 I'd no sooner finished CARLA, my first book for Midwood Tower, than Harry Shorten asked for another. I'd just returned to Antioch College, where after two years as an undistinguished student I'd dropped out for a year to hang on to a summer job at Scott Meredith's literary agency and bucket shop. It was wonderful training, but after a year there I decided I should go back to school, where I had a chance to assume the editorship of the school newspaper. So there I was in Yellow Springs, Ohio, taking a batch of English courses, and I had a publisher who wanted me to write a book. What'll it be, Larry-a paper on Tobias Smollett and the Great Chain of Being, or 50,000 words of soul-searching and sex for Harry Shorten? 50,000 words for which I'd be paid $600?No contest, really.The story concern a has-been writer trying to get back in the game, and all these years later I find it interesting that this young wannabe was already picturing himself on the way down and out.A fellow named Craig said some nice things in his Amazon review, which vanished when an earlier edition went off the boards, so I'll excerpt it here: "The protagonist Dan Larkin is an aspiring author, like Block himself, and it's downright eerie how many aspects of Dan's fictional life would end up paralleling the arc of Block's own life over the next 25 years: the progression from obscure pulp writer to eventual best-seller stardom, the women, the binge drinking, and the eventual spiral into alcoholism. . ."There are flashes of some really good writing. The narrator's voice resembles shades of Matt Scudde at times. It doesn't quite match up to the plot, which is mostly devoid of gritty realism and tension. There is a very funny chapter detailing a ten-day drinking binge that presages passages in After the First Death and When the Sacred Gin Mill Closes. There's a memorable scene of frank and unexpected violence during an encounter with an older woman. Above all, the author's young-eyed enthusiasm for the publishing industry and the life of being a professional writer shines through despite an affected veneer of world-weariness."My guess is that some of the writing stuff is interesting. Interesting, too, is the title-which was not my idea, in case you were wondering. I have no idea what title I hung on it, but Harry or one of his elves went for A STRANGE KIND OF LOVE. Meanwhile, my very first novel, a sensitive lesbian coming-of-age effort which I'd called SHADOWS, was in the process of being accepted over at Fawcett Books for their Crest imprint. (They were the first publisher to see it, and in fact had it in hand before I wrote the opening sentence of CARLA, but Harry could commission two books and publish them both in less time than Fawcett could read a manuscript and reach a decision.) And when they did say yes to it, and when I'd revised it to their satisfaction, they changed my pen name (from Rhoda Moore to Lesley Evans, for reasons no one ever explained) and my title from SHADOWS to STRANGE ARE THE WAYS OF LOVE.A STRANGE KIND OF LOVE and STRANGE ARE THE WAYS OF LOVE? Really? I don't think I've ever used the word "strange" in a title since, and doubt I ever shall. Unless, of course, I were to write a politically incorrect novel of a young gay man's coming out, but I don't think so. Besides, STRANGE FRUIT only works if you can get Billie Holiday to sing it.The cover, as I've just learned from Lynn Munroe's wonderful website, is by Rudy Nappi (1923-2015), who was for 20 years the principal cover artist for the Hardy Boys and Nancy Drew mysteries. The rumor that his cover for A STRANGE KIND OF LOVE was adapted from a rejected Nancy Drew cover strikes me, I have to say, as fanciful. But what do I know?