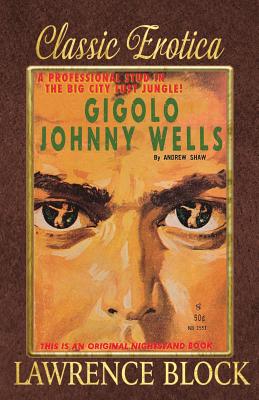 17-year-old Johnny Wells was a very handsome young man, and you'd have called him a babe magnet, but I'm afraid they didn't have that phrase back in 1961. He decided to capitalize on his looks and the response they earned from women, invested in a haircut and a good wardrobe, moved out of his slum apartment and into a budget hotel, and reinvented himself as a gigolo.The life transformed him. He took up reading, became devoted to it, and educated himself. His new contacts provided him with polish and sophistication. He moved to a good hotel, put money in the bank. And then an out-of-the-blue bout of impotence left him unfit for his profession.Next up, true love-and another transformation. Before you know it he's an advertising copywriter, a rising star on Madison Avenue. A family man.But fate's not done dealing, and the next card he draws is down and dirty...Gigolo Johnny Wells was published by Nightstand Books in 1961, and elicited a surprising response from whoever was serving as editor at the time. (Harlan Ellison, I've been told, but maybe not. And, really, who cares?) Whoever it was, he loved the book and asked for more. I must have written one, but efforts to find it have failed. And, really, who cares?A note on the name: Several years later, I needed a pen name for a work described as a cross-cultural survey of comparative sex techniques. I'd by then long since forgotten having used the name Johnny Wells in this book (which Nightstand had titled "Lover") and the name I stuck on Eros & Capricorn was John Warren Wells, a name I was to go on using on almost two dozen books of sexually-oriented nonfiction. Let me assure you that Johnny Wells and John Warren Wells are not related.