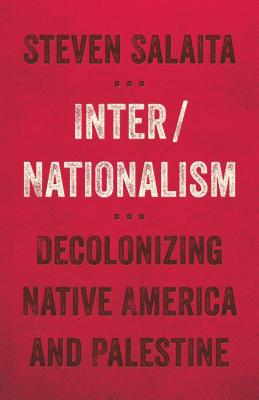 By Steven Salaita
Email or call for price
Special Order

“The age of transnational humanities has arrived.” According to Steven Salaita, the seemingly disparate fields of Palestinian Studses and American Indian studies have more in common than one may think. In Inter/Nationalism, Salaita argues that American Indian and Indigenous studies must be more central to the scholarship and activism focusing on Palestine.

Salaita offers a fascinating inside account of the Boycott, Divestment, and Sanctions (BDS) movement—which, among other things, aims to end Israel’s occupation of Palestinian land. In doing so, he emphasizes BDS’s significant potential as an organizing entity as well as its importance in the creation of intellectual and political communities that put Natives and other colonized peoples such as Palestinians into conversation. His discussion includes readings of a wide range of Native poetry that invokes Palestine as a theme or symbol; the speeches of U.S. President Andrew Jackson and early Zionist thinker Ze’ev Jabotinsky; and the discourses of “shared values” between the United States and Israel.

Inter/Nationalism seeks to lay conceptual ground between American Indian and Indigenous studies and Palestinian studies through concepts of settler colonialism, indigeneity, and state violence. By establishing Palestine as an indigenous nation under colonial occupation, this book draws crucial connections between the scholarship and activism of Indigenous America and Palestine.

Steven Salaita is the author of several books, including Uncivil Rites: Palestine and the Limits of Academic Freedom and Israel’s Dead Soul.

"This is a powerful and moving analysis of what it means to decolonize settler societies through an unflinchingly ethical and incisively original notion of inter/nationalism. Steven Salaita is, as always, bold, brilliant, and visionary. Inter/Nationalism offers a searing, comparative analysis of what liberation means in North America and Palestine-Israel. It is a must read for academics, activists, and anyone interested in challenging the logics of ethnic cleansing and settler civility."—Sunaina Maira, University of California, Davis

"Steven Salaita grounds his analysis within various literatures, histories, and political movements in order to consider the ongoing, transnational circuits of liberalism and empire in the politics of critique, aspiration, and solidarity. Much to Salaita’s credit, his cases do not lose their specificity and their nuance as he considers specific efforts for land, global justice, and dignity. This is a welcome work of criticism and analysis from a truly transnational scholar of Indigenous politics and literature."—Audra Simpson, Columbia University

"Although often specific in its geographical articulation, settler-colonialism is a global phenomena that requires a truly global response. This is the message powerfully hammered home in Steve Salaita's crucially important Inter/Nationalism. Building on years of research and activism in support of Native American and Palestinian self-determination, Salaita advances a radically transnational view of decolonization grounded in a richly comparative account of Native American/Indigenous solidarity and our mutual struggles for land, freedom, and dignity."—Glen Coulthard, author of Red Skin, White Masks: Rejecting the Colonial Politics of Recognition

"Simultaneously a worthwhile contribution to academic theory and a powerful articulation of the potentialities of inter/national solidarity. This is a notable feat at a moment where anti-intellectualism and progressive despair threaten to overwhelm, but Salaita’s work here ought serve as a hopeful reminder of the ongoing and truly global resistance."—Hong Kong Review of Books

"The book is not only a brilliant study, it is also a needed incitement."—Journal of Palestine Studies

"This is a thought-provoking book on comparative settler-colonial ideology and a persuasive plea for greater cooperation between American Indian and Palestine Studies."—Ethnic and Racial Studies