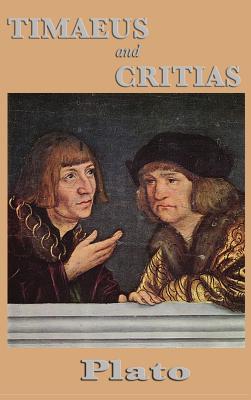 Timaeus is one of Plato's dialogues, mostly in the form of a long monologue given by the title character. The work puts forward speculation on the nature of the physical world and human beings. It is followed by the dialogue Critias. Critias, one of Plato's late dialogues, it contains the story of the mighty island kingdom Atlantis and its attempt to conquer Athens.

Critias is the second of a projected trilogy of dialogues, preceded by Timaeus and followed by Hermocrates, though the latter was possibly never written and Critias was left incomplete.

Born to a politically connected and aristocratic family between 428 and 423 B.C., Plato received a good standard of education at an early age, and was able to immerse himself in the intellectual community of Ancient Athens. His most notable contemporary and mentor was Socrates, an eccentric but highly capable philosopher who was to feature as a principle character in most of Plato's scholarly writings. Owing to his high standard of education in art, mathematics, rhetoric and philosophy, Plato was able to assemble a comprehensive philosophy of his own via his favoured form of writing which was the dialogue. In total, over thirty of these Platonic dialogues have survived the passage of time - and together they form the backbone of Ancient Greek philosophy. After enjoying success as a writer and academic, Plato in 385 B.C. founded The Academy. This school was to unite the most capable thinkers of Greece, and would help to advance learning throughout Greek society's Golden Age. It was in the Academy that Plato would instruct and apprentice Aristotle, who was to go on to gain renown as a philosopher and scholar. Owing to his reputation Plato was hired by Dion, whose nephew Dionysus II was the rightful ruler of Sicily - Dion wished his nephew to receive a good education in the art of sound and wise governance. However Dionysus II became suspicious and accused both Plato and Dion of conspiracy - after some time spent under arrest, Plato returned to his homeland. In his late period, Plato continued to tutor and mentor the best young minds of Athens, and he would perish around 348 B.C. having lived beyond the age of eighty. Today Plato's legacy remains lauded: the philosopher ably used logic and reason to imbue insight on democratic governance, while developing a cohesive philosophy on topics such as art, metaphysics, justice and the 'Theory of Forms' - his iconic take on how ideas related to reality.