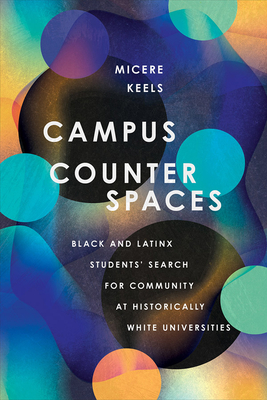 By Micere Keels
This item is not available to order from Room.

Frustrated with the flood of news articles and opinion pieces that were skeptical of minority students' imagined campus microaggressions, Micere Keels, a professor of comparative human development, set out to provide a detailed account of how racial-ethnic identity structures Black and Latinx students' college transition experiences.

Tracking a cohort of more than five hundred Black and Latinx students since they enrolled at five historically white colleges and universities in the fall of 2013 Campus Counterspaces finds that these students were not asking to be protected from new ideas. Instead, they relished exposure to new ideas, wanted to be intellectually challenged, and wanted to grow. However, Keels argues, they were asking for access to counterspaces--safe spaces that enable radical growth. They wanted counterspaces where they could go beyond basic conversations about whether racism and discrimination still exist. They wanted time in counterspaces with likeminded others where they could simultaneously validate and challenge stereotypical representations of their marginalized identities and develop new counter narratives of those identities.

In this critique of how universities have responded to the challenges these students face, Keels offers a way forward that goes beyond making diversity statements to taking diversity actions.

Micere Keels is Associate Professor in Comparative Human Development at the University of Chicago. She is also the founding director of the Trauma Responsive Educational Practices project.