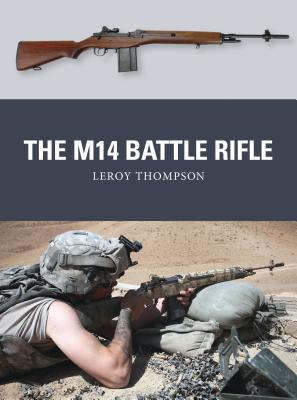 By Leroy Thompson, Johnny Shumate (Illustrator), Alan Gilliland (Illustrator)
$22.00
This item is out of stock with our warehouse. Some recently published books may be in stock @ Room. Email to check.

This is book number 37 in the Weapon series.

Featuring specially commissioned full-color artwork and archive and close-up photographs, this engaging study tells the story of the M14, the long-lived battle rifle that remains in front-line service with US forces more than 50 years after its first adoption.

The 7.62×51mm M14 select-fire automatic rifle was the primary US service rifle for only a decade from 1957 before being supplanted by the 5.56×45mm M16, yet many familiar with the M14 consider it the best rifle ever to see US service. Based on the well-proven M1 Garand rifle, the M14 addressed the perceived "deficiencies" of the Garand based on the latter's service in World War II and Korea. The M14 incorporated a detachable box magazine and select-fire capability, and used a shortened version of the .30-06 cartridge - the 7.62×51mm NATO round - better suited to a "battle rifle."

Though primarily designed for a war in Europe, where it would take its place alongside the other 7.62×51mm battle rifles (FAL, G3, etc.) in the hands of NATO allies, probably the first combat use of the M14 was with the 82nd Airborne Division in the Dominican Republic in 1965-66. The M14 also saw action during the early days of the escalating US involvement in the Vietnam War, though it proved rather too heavy and lengthy for jungle usage and was supplanted in that theater by the M16 in 1966-67. Even so, some Army engineer units continued to use the M14 as did US Marines, who often retained one or two in each squad. Even after the adoption of the M16, US troops in Europe retained the M14 until 1970 for compatibility with other NATO armies.

Although the M14 was intended to replace four weapons, namely the .30-06 M1 Garand, the .30 M1 Carbine, the .45 M3 submachine gun (SMG), and - in its M15 and M14A1 models - the .30-06 Browning Automatic Rifle (BAR), this proved to be an overly optimistic goal. The new weapon was deemed virtually uncontrollable on full-automatic in the SMG role, but its 7.62×51mm round proved too light for the BAR's squad automatic weapon role.

Even so, the M14 has remained a Phoenix among US infantry weapons, rising again and again when a more powerful battle rifle has been needed. Its accuracy and reliability led to its modification and adoption in 1975 as a semi-automatic sniping weapon - the M21 - which remained the Army's primary sniper rifle until 1988, although seeing widespread service in Iraq well after that date. Since 2001 the M14 has seen a resurgence as a Designated Marksman Rifle, being employed by all branches of the US military, especially in Afghanistan where the open terrain makes longer-range engagements common. It has remained a viable limited-use US infantry weapon for over five decades, and appears likely to see action wherever US forces require a longer-range, accurate battle rifle for some years to come.