The Silver Star: A Novel (Paperback) 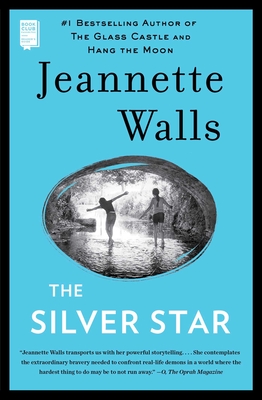 “In this novel by bestselling memoirist Walls, 12-year-old Bean and her older sister Liz are left to fend for themselves when their musically inclined mother takes her leave of them to 'sort things out.' The sisters embark on a trip from California to Virginia to find their Uncle Tinsley and, hopefully, some stability. Bean's impetuous enthusiasm and clear sense of what is right are the girls' best defense against the prejudices, injustices, and abuse that await them in 1970s Byler, Virginia. Scout Finch has met her match in Bean in this wonderfully woven tale of perseverance, strong family bonds, the triumph of love and loyalty, and the emergence of unlikely heroes. Pitch perfect and pure pleasure!”
— Linda McLoughlin Figel, pages: a bookstore, Manhattan Beach, CA

From the #1 New York Times bestselling author of The Glass Castle, Jeannette Walls’ gripping new novel that "transports us with her powerful storytelling...She contemplates the extraordinary bravery needed to confront real-life demons in a world where the hardest thing to do may be to not run away" (O, The Oprah Magazine).

It is 1970 in a small town in California. “Bean” Holladay is twelve and her sister, Liz, is fifteen when their artistic mother, Charlotte, takes off to find herself, leaving her girls enough money to last a month or two. When Bean returns from school one day and sees a police car outside the house, she and Liz decide to take the bus to Virginia, where their widowed Uncle Tinsley lives in the decaying mansion that’s been in Charlotte’s family for generations.

An impetuous optimist, Bean soon discovers who her father was, and hears stories about why their mother left Virginia in the first place. Money is tight, and the sisters start babysitting and doing office work for Jerry Maddox, foreman of the mill in town, who bullies his workers, his tenants, his children, and his wife. Liz is whip-smart—an inventor of word games, reader of Edgar Allan Poe, nonconformist. But when school starts in the fall, it’s Bean who easily adjusts, and Liz who becomes increasingly withdrawn. And then something happens to Liz in the car with Maddox.

Jeannette Walls has written a deeply moving novel about triumph over adversity and about people who find a way to love each other and the world, despite its flaws and injustices.

Jeannette Walls graduated from Barnard College and was a journalist in New York. Her memoir, The Glass Castle, has been a New York Times bestseller for more than six years. She is also the author of the instant New York Times bestsellers The Silver Star and Half Broke Horses, which was named one of the ten best books of 2009 by the editors of The New York Times Book Review. Walls lives in rural Virginia with her husband, the writer John Taylor.

“At heart Walls is a wonderful yarn-spinner…This is a page-turner, built for hammock or beach reading.”
— Karen Valby

“Walls is adept at steeping her characters in some intense, old-fashioned drama…The Silver Star is a lovely, moving novel with an appealing narrator in Bean.”
— Carmela Ciuraru

“Walls writes with easy assurance about Liz and Bean, proving in fiction as she did in her memoir, The Glass Castle, that she knows children’s hearts—as well as the evil that can lurk in the hearts of grown-ups.”
— Parade

“Walls writes with the paired-down incisiveness of a memoirist looking for the significance of every incident, but it’s the way she draws Bean, so strong even in the face of all the additional challenges that come with her age, gender, and innocence, that will make this book a hit with readers.”
— Nicholas Mancusi

Walls has written yet another gripping story of a courageous and sensible girl surviving the adults around her.”
— Holly Silva

“Told with a balanced, yet whimsical, voice of insight and awareness...[The Silver Star] is set during the Nixon ‘70s and Vietname War, and the author adeptly evokes the tumultuous era in the narrative without letting it overwhelm the primary thread of Bean’s coming-of-age adventures.”
— S. Kirk Walsh

“A polished work of fiction…Engaging…Fans will find echoes of her coruscating family chronicle that first struck a chord with readers in 2005, but The Silver Star is the novel of a more confident, mature and calculating writer…[an] atmospheric bildungsroman of adolescent passage, changing times and bent but unbroken family bonds.”
— Jane Sumner

“A great spirit comes through The Silver Star…Jeannette Walls knows how to make characters pop off the page (and tear your heart out in the process.)”
— Angela Mattano

“With immense charm and warmth, Walls, the author of The Glass Castle, has created a lively account of kids finding a way to thrive in the absence of reliable parents.”
— Real Simple

“Jeannette Walls transports us with her powerful storytelling…Using Bean’s expertly crafted, naively stubborn voice, Walls contemplates the extraordinary bravery needed to confront real-life demons in a world where the hardest thing to do may be to not run away.”
— Abbe Wright

“Jeannette Walls is a master at her craft. In the same way she spoke candidly of her own parents’ shortcomings in The Glass Castle, in The Silver Star she lends this candid voice to Bean, and captures the inner workings of an adolescent’s mind perfectly….The Silver Star stands strong as its own story, wholly unique and wholly captivating.”
— Kristin Fritz

“Walls’ writing is lively and her dialogue crips, and the girls’ struggles with their mother ring true.”
— Margaret Quamme

“[The Silver Star is] an examination of bad parenting and resilient children in a rich and complex setting. Bean is a compelling character, and it is fascinating to watch her ideas about both her mother and her sister change as the book progresses.”
— Sarah Rachel Egelman

“Walls writes with equal tenderness for her most beloved characters and the least among them. It takes a compassionate soul to find the beauty in despair and that’s what Walls does best.”
— Amy MacKinnon

“Jeannette Walls jumps off the memoir train and hitches a ride on the novel form with The Silver Star.”
— Elissa Schappell

“When Bean reads To Kill a Mockingbird in school, she seems like a long-lost cousin to Scout…She makes for a strong and spunky protagonist.”
— Publishers Weekly

“Walls turns what could have been another sentimental girl-on-the-run-finds-home cliché into a fresh consideration of both adolescence and the South on the cusp of major social change.”
— Kirkus Reviews (starred review)

“[A] moving book…With relatable characters and a plot that can both rend and heal hearts, The Silver Star is a captivating novel.”
— Elizabeth Reid

“Walls weaves a story of triumph and justice.”
— Everett Herald