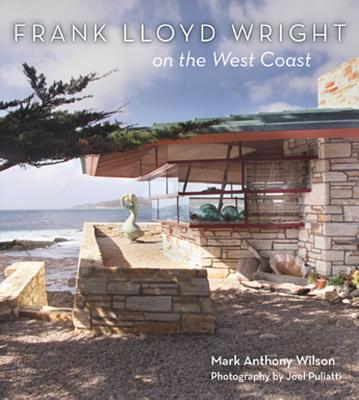 By Mark Wilson, Joel Puliatti (Photographer)
$50.00
This item is out of stock with our warehouse. Some recently published books may be in stock @ Room. Email to check.

Frank Lloyd Wright's buildings on the West Coast have not been thoroughly covered in print until now. Between 1909 and 1959, Wright designed a total of 38 structures up and down the West Coast, from Seattle to Southern California. These include well-known structures such as the Marin County Civic Center and Hollyhock House in Los Angeles, and many lesser-known gems such as the 1909 Stewart House near Santa Barbara.

With more than 200 photographs by veteran architectural photographer Joel Puliatti and 50 archival images (many of which have never been seen in print before), this comprehensive survey of Wright's West Coast legacy features background information on the clients' relationships with Wright, including insights gleaned from correspondence with the original owners and interviews with many of the current owners.

MARK ANTHONY WILSON is an architectural historian who has been writing and teaching about architecture for more than thirty-five years. He holds a B.A. in history from UC Berkeley and an M.A. in history and media from California State University, East Bay. He has written four previous books about architecture, including Julia Morgan: Architect of Beauty (Gibbs Smith, 2007) and Bernard Maybeck: Architect of Elegance (Gibbs Smith, 2011). His articles have appeared in the New York Times, Los Angeles Times, San Francisco Chronicle, Christian Science Monitor, USA Today, and elsewhere. Mark lives in Berkeley, California, with his wife, Ann, and his daughter, Elena.