The Killer Book of Infamous Murders: Incredible Stories, Facts, and Trivia from the World's Most Notorious Murders (Paperback) 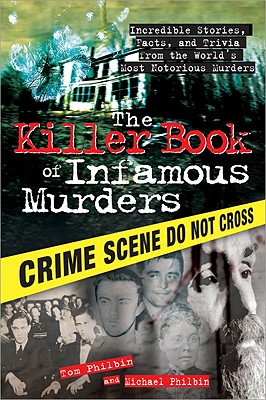 Murders have long made headlines, but only those with the most heartless betrayals, twisted lies, and gruesome crime scenes have earned a place in infamy. The Killer Book of Infamous Murders takes you behind the crime scene tape and into the heart of notorious and remorseless massacres.

Uncover fascinating facts about killers' dark pasts, pent-up rage, and what finally caused them to snap--leading them to commit some of the world's most shocking crimes, including:

Bury yourself in these edge-of-your-seat tales, read chilling quotes and courtroom transcripts, and test your crime IQ with trivia. You'll shudder in horrified delight--and you just might need to sleep with the lights on.

Tom Philbin and his brother Mike have been close to crime for many years. Tom is a long-time freelance writer who has written nine cop novels. He lives in New York. Mike Philbin is a musician and this is his third book. Mike lives in New Hampshire.