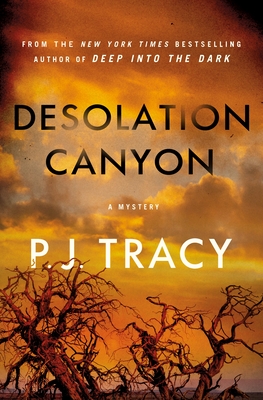 This is book number 2 in the The Detective Margaret Nolan Series series.

P.J. Tracy “seems to have found her literary sweet spot” (New York Times Book Review) with her dazzling new series, and in Desolation Canyon, fans get a deeper look into the complex characters who call Los Angeles home.

LAPD Detective Margaret Nolan is struggling to move forward after the death of her brother in Afghanistan and taking a life in the line of duty. Her stoic parents offer little support – they refuse to address anything difficult, and she’s afraid their relationship is eroding beyond the point of recovery.

The days off are the hardest, because they give Margaret time to think. A moment of weakness leads to cocktails with a colleague—an attraction she knows could be dangerous —at the luxurious Hotel Bel-Air bar. A stroll through the grounds leads to a grim discovery beneath the surface of Swan Lake: the body of a successful attorney who made his fortune in international trade.

It initially appears to be death by misadventure, but the case is anything but straightforward. As a series of shocking revelations emerge, Nolan finds herself confronting a sinister cabal that just might destroy her and everyone she loves.

“With Desolation Canyon, Tracy rises to the rarified level of Michael Connelly and David Baldacci. . . Tracy draws each scene with the skill of a brilliant artist and hits every note like a master maestro.” —Jon Land, Providence Sunday Journal

“With well-developed characters with flaws and faults of their own, this is a mystery with plenty to think about after the story is done, and the suspense plot is great too.” —The Parkersburg News and Sentinel

“Something for everyone, and then some.” —Kirkus Reviews

“Nolan returns in [Desolation Canyon], and it’s even better than the first. . . Fans of the Monkeewrench novels, which also feature a tough, no-nonsense female protagonist, should find the Nolan books very much up their alley.” —Booklist

Praise for Deep into the Dark

“Riveting. . . Tracy’s characters are richly developed and seriously human, each struggling with how to overcome their dangerous dark pasts. I’m eager for more of Tracy’s new gang.” —Minneapolis Star Tribune

"An intense, unforgettable novel that focuses on the predators and prey that thrive in the city. The intricately plotted story handles Easton’s PTSD with compassion while revealing his disturbing torment. Three complex characters, Sam, Melody, and Detective Nolan, are introduced in a gripping story for thriller fans.” —Library Journal (starred review), Pick of the Month

“[A] riveting series launch. . . . The suspense rises as the plot takes some unexpected twists and turns.” —Publishers Weekly

“The layered storytelling and empathy offered to every character make Deep into the Dark not just a hard-to-put-down thriller, but one that leaves the reader with much to think on, with no easy answers in sight.” —BookPage