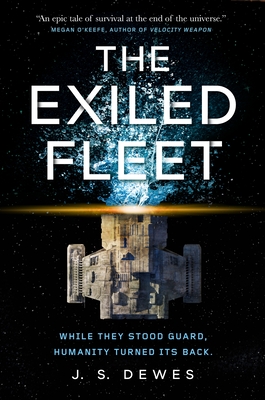 This is book number 2 in the The Divide Series series.

J. S. Dewes continues her fast paced, science fiction action adventure series, the Divide, with The Exiled Fleet, where The Expanse meets The Black Company—the survivors of The Last Watch refuse to die.

The Sentinels narrowly escaped the collapsing edge of the Divide.

They have mustered a few other surviving Sentinels, but with no engines they have no way to leave the edge of the universe before they starve.

Adequin Rake has gathered a team to find the materials they'll need to get everyone out.

To do that they're going to need new allies and evade a ruthless enemy. Some of them will not survive.

The Divide series
The Last Watch
The Exiled Fleet

After graduating from Columbia College Chicago with a degree in film production, J. S. Dewes went on to serve as cinematographer for independent films, write, produce, and shoot a zombie musical, slay internet dragons, and act as lighting designer for presidents and presidential-hopefuls so many times it became mundane. Having grown weary of such pedestrian exploits, she decided to begin forging worlds in the form of novels, returning to her roots in science fiction and the written word.

She currently resides in Madison, Wisconsin with her husband, who’s proven to be a mixed blessing, but he makes her laugh, so she’s decided to stick it out. They have two dogs (full blessings) and a cat of unpredictable demeanor. The Last Watch is her debut novel.

Praise for The Exiled Fleet

“Well-crafted intrigue, tense battles, and a lot of heart make for a page-turning adventure on the way to a conclusion that will leave fans anxiously awaiting the next installment.”—Publishers Weekly, (starred review)

”Dewes's follow up to The Last Watch keeps the action front and center, while presenting an expansive science fiction story that is both richly complex and accessible.”—Library Journal

“Screenwriter Dewes knows how to twist her story in unexpected directions and pull her well-drawn characters out of impossible situations.” —Booklist

Praise for The Last Watch

“The Last Watch is a bravura debut that blends great action with compelling characters, lighting up this new series like a dark matter generator.” —Booklist

“An epic tale of survival at the end of the universe.” —Megan E. O'Keefe, author of Velocity Weapon

“Crisp writing, vivid characters, and a plot that beguiles the imagination. The Last Watch is a stunning military sci-fi debut. I was hooked from the opening lines. If you like science fiction, then this book is definitely for you.” —Jasper T. Scott, USA Today Bestselling Author

“The Last Watch is an amazing debut. The smart world-building and explode-off-the page action scenes make it perfect for fans of The Expanse and other fast-paced Sci Fi. I predict that Dewes is going to be a 'must read' author for years to come.” —Michael Mammay, author of Planetside

“More fun than that time The Expendables, the Dirty Dozen and all of The Night’s Watch all got picked up by a random quantum tear in the fabric of spacetime and shot out the edge of the universe to kick ass and save humanity.” —John Birmingham, author of the Axis of Time trilogy

“Take the action of Marko Kloos' Frontlines novels, mix in the intricate world building of Game of Thrones or Warhammer 40,000, and light the fuse. . . . Bursting with snappy dialogue and detail and furious with action, you’ll want to catch your breath when it’s over, and then you’ll want more. Bring it on.” —Dayton Ward, bestselling author

“A scary edge-of-reality setup, cool martial-arts tattoos, interesting time anomalies, and OMG! The Universe is contracting!? Clear your schedule, because once you've gotten on this roller coaster, you're not going to want to get off until you've ridden it to the end.” —Emily Devenport, author of Medusa Uploaded

“The Last Watch has it all! Risky orbital maneuvers! Knife fights with grotesque aliens! Mysterious ancient artifacts! Secret royalty! Tragic backstories! It's classic military space opera with a touch of the cosmic.” —David Levine, winner of the Andre Norton Award for Arabella of Mars

“J.S. Dewes' impressive debut...features big ideas, kick-ass characters, and an environmental collapse; you have to try to not be interested in this book. Highly recommended!” —Primmlife