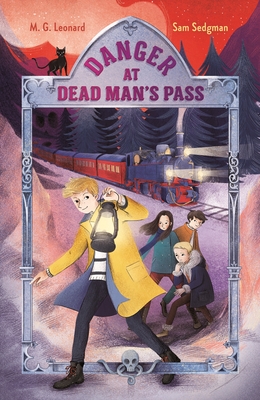 This is book number 4 in the Adventures on Trains series.

Twelve-year-old artist and budding railway detective Hal Beck is back on the case. This time, he and his Uncle Nat have been invited by Baron Essenbach to help solve a mystery...a supernatural one. Because Essenbach thinks there might be something going on with his wife's family, the Kratzensteins. They are powerful German railway tycoons who are very rich—and maybe cursed.

After all, legend says that an ancestor of the Kratzensteins once made a deal with the devil.

Hal and Uncle Nat agree to help going undercover to spend time with the family and investigate. As more and more weirdness happens, can Hal solve this paranormal puzzle before it's too late?

M. G. Leonard has made up stories since she was a girl, but back then, adults called them lies or tall tales. As a grown-up, her books have been translated into over forty languages and won many awards. She lives in Brighton, England, with her husband, two sons, a cat, a dog, and a tank of exotic beetles.

Sam Sedgman is an award-winning, bestselling novelist, and lifelong crime fiction enthusiast. He lives in London, where he once ran a company devising murder mystery treasure hunts. He grew up with a railway line at the bottom of his garden and has been fascinated by trains ever since.

Elisa Paganelli was in Modena Italy and lives in the UK. She is the illustrator of the Adventures on Trains series.