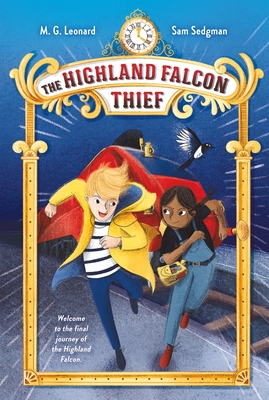 This is book number 1 in the Adventures on Trains series.

In The Highland Falcon Thief: Adventures on Trains #1, a middle-grade series starter from MG Leonard and Sam Sedgman, a young boy is swept up in an investigation to uncover the perpetrator of a jewel theft.

When eleven-year-old Harrison "Hal" Beck is forced to accompany his travel-writer uncle on the last journey of a royal train, he expects a boring trip spent away from video games and children his age.

But then Hal spots a girl who should not be on board, and he quickly makes friends with the stowaway, Lenny. Things get even more interesting when the royal prince and princess board for the last leg of the journey—because the princess's diamond necklace is soon stolen and replaced with a fake! Suspicion falls on the one person who isn't supposed to be there: Lenny.

It's up to Hal, his keen observation, and his skill as a budding sketch artist to uncover the real jewel thief, clear his friend's name, and return the diamond necklace before The Highland Falcon makes its last stop.

M. G. Leonard is the award winning, bestselling author of the Beetle Boy books, recently optioned for TV. She has a first-class honours degree in English literature and an MA in Shakespeare Studies from Kings College London. She works as a freelance Digital Media Producer for clients such as the National Theatre, and Harry Potter West End, and previously worked as a Senior Digital Producer at the National Theatre, the Royal Opera House and Shakespeare’s Globe. She lives in Brighton with her husband and two sons, all of whom are crazy about trains.

Sam Sedgman is a playwright, an award winning digital producer, and coauthor of the Adventures on Trains series with M. G. Leonard. Sedgeman has a first class honors degree from the University of Warwick in English and Creative Writing, and holds a Master’s in Text and Performance from RADA and King’s College London. He works as a digital project manager for the National Theatre, where he also hosts and co-produces their podcast. He has previously worked as a freelance digital producer for arts and literature organizations across the country, and founded a company creating bespoke murder mystery treasure hunts for adventurous Londoners. His plays have been performed in three countries, and his work has been shortlisted for The Courtyard Theatre Award. He has written articles on culture, technology and free speech for The Guardian, Complex UK and The Space. He grew up with a railway line at the bottom of his garden and has been fascinated by trains ever since.

Praise for The Highland Falcon Thief:

"M. G. Leonard and Sam Sedgman bring the classic mystery on a train bang up to date with a carriage-load of wit and suspense." —Ross Welford, author of Time Travelling With a Hamster

"A thrill-ride of a mystery, guaranteed to be one of the most fun, atmospheric page turners of 2020." —Lauren St. John, author of Kat Wolfe Investigates

"A runaway romp of a read." —Piers Torday, author of The Lost Magician

"Illustrated with lively black-and-white drawings, this well-constructed, fast-paced mystery is the first volume in the Adventures on Trains series." —Booklist

"[A] light-hearted whodunit with a mixture of royalty, socialites, and commoners. ... The constant twists, turns, and misdirection keeps readers guessing until the guilty are revealed. Train enthusiasts, mystery buffs, and adventurers alike won’t be able to resist this fast-moving quest." —The Bulletin

"Debut novelist Leonard gives readers a rare glimpse into the world of insects, mixing adventure, mystery, and science to create a story that's much more than just a novel about bugs. Even the most squeamish will be charmed." —Publishers Weekly, starred review

"Leonard unravels the madcap plot in sporadic bursts of frenzied action and humor. Overall, a charming and (at times) affecting romp through beetle land." —Kirkus Reviews

"Engaging . . . The story moves quickly, and the characters are both wacky and entertaining." —School Library Journal

"If I didn't already devote most of my waking hours to beetles, reading this book would make me want to . . ." —Max Barclay, Coleoptera Collections Manager, Natural History Museum, London