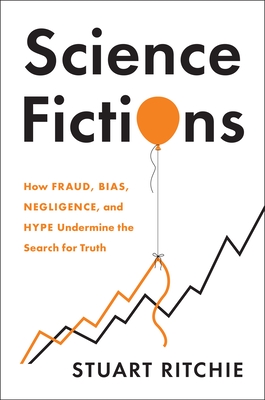 An insider’s view of science reveals why many scientific results cannot be relied upon – and how the system can be reformed.

Science is how we understand the world. Yet failures in peer review and mistakes in statistics have rendered a shocking number of scientific studies useless – or, worse, badly misleading. Such errors have distorted our knowledge in fields as wide-ranging as medicine, physics, nutrition, education, genetics, economics, and the search for extraterrestrial life. As Science Fictions makes clear, the current system of research funding and publication not only fails to safeguard us from blunders but actively encourages bad science – with sometimes deadly consequences.

Stuart Ritchie’s own work challenging an infamous psychology experiment helped spark what is now widely known as the “replication crisis,” the realization that supposed scientific truths are often just plain wrong. Now, he reveals the very human biases, misunderstandings, and deceptions that undermine the scientific endeavor: from contamination in science labs to the secret vaults of failed studies that nobody gets to see; from outright cheating with fake data to the more common, but still ruinous, temptation to exaggerate mediocre results for a shot at scientific fame.

Yet Science Fictions is far from a counsel of despair. Rather, it’s a defense of the scientific method against the pressures and perverse incentives that lead scientists to bend the rules. By illustrating the many ways that scientists go wrong, Ritchie gives us the knowledge we need to spot dubious research and points the way to reforms that could make science trustworthy once again.

Stuart Ritchie is a lecturer in the Social, Genetic and Developmental Psychiatry Centre at King’s College London. His main research focus is human intelligence: how it relates to the brain, how much it’s affected by genetics, and how much it can be improved by factors such as education. He is a noted supporter of the Open Science movement, and has worked on tools to reform scientific practice and help scientists become more transparent when reporting their results.

“A highly readable and competent description of the problems facing researchers in the 21st century... An excellent primer for anyone who wants to understand why and how science is failing to live up to its ideals.”
—Wired

“An impressive achievement... A handy guide to what can go wrong in science, nicely blending eye-popping anecdotes with comprehensive studies.”
—National Review

“Liberally documented with amazing stories... An uncompromising examination of the collision between the ideals of science and the realities of scientific publishing. Highly recommended for popular science readers curious about what lurks behind science headlines.”
—Library Journal (starred review)

“A bracing indictment... Thorough and detailed, this is a sobering and convincing treatise for anyone invested in the intellectual credibility of science.”
—Publishers Weekly

“Excellent... A fascinating study... Sure, some scientists are corrupt. Some are negligent. Some are biased. But that does not mean we need less science. It means we need better science. That’s why books like this are so important.”
—Evening Standard (London)

“We should listen to this warning about how neophilia and hype is ruining research... Ritchie has a gift for turning boring statistical processes into thrilling detective stories.”
—The Times (London)

“A desperately important book. Stuart Ritchie’s much-needed work brilliantly exposes the fragility of the science on which lives, livelihoods, and our whole society depend. Required reading for everyone.”
—Adam Rutherford, author of A Brief History of Everyone Who Ever Lived

“An engagingly accessible set of cautionary tales to show how science and scientists can be led astray, in some instances with fatal consequences, as well as a clear-eyed and chillingly accurate view of how current funding and publishing practices are leading to more of the same mistakes. As we rely now more than ever on science to solve the world’s problems, Science Fictions should be compulsory reading for anyone involved in the communication of science to policy makers and to the public.”
—Gina Rippon, author of The Gendered Brain