Larry and the Meaning of Life (The Larry Series #3) (Paperback) 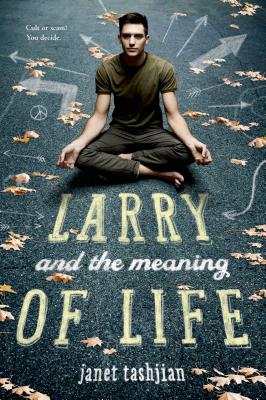 This is book number 3 in the The Larry Series series.

Josh Swensen (otherwise known as Larry) can't seem to get off the couch. His usual overactive imagination and save-the-world mindset have all but vanished, and his best friend Beth is seriously worried.When Beth coaxes Josh into taking a walk at Walden Pond, Josh meets Gus Muldarian, a spiritual guru who convinces him to join his study group as a way to find deeper meaning in life. Josh thinks Gus is a joke. Still, feeling desperate and seeing no way out of his rut, he agrees to try it. What begins as a harmless Thoreau-esque search for meaning soon turns into Josh's most chaotic and profound adventure yet.

After the success of The Gospel According to Larry and Vote for Larry, Janet Tashjian returns with yet another tour de force, Larry and the Meaning of Life—a book that explores important topics and will keep teens hooked right until the unexpected end.

Janet Tashjian is a middle-grade and young adult novelist who’s been writing books for children for over two decades. Her first novel Tru Confessions was made into a critically acclaimed Disney TV movie starring Clara Bryant and Shia LaBeouf. The Gospel According to Larry series is a cult favorite and Fault Line is taught in many middle and high schools. Her bestselling My Life As a Book series is illustrated by her son, Jake. They also collaborated on the Einstein the Class Hamster series.

Janet collaborated with fellow Macmillan author Laurie Keller on the chapter book series Marty Frye, Private Eye. Janet currently lives in Los Angeles and made her new home city the setting of the Sticker Girl series, which details the adventures of Martina who overcomes being shy with the help of her magical stickers that come to life.

“Once again, Tashjian manages to take a fairly unbelievable premise and make it seem more than fairly believable.” —The Horn Book on VOTE FOR LARRY

“Josh has a fresh, intelligent voice, filled with common sense, passion, and conviction . . . A solid and timely work that will make readers laugh, but more important, will make them think.” —VOYA on VOTE FOR LARRY