American Demon: Eliot Ness and the Hunt for America's Jack the Ripper (Hardcover) 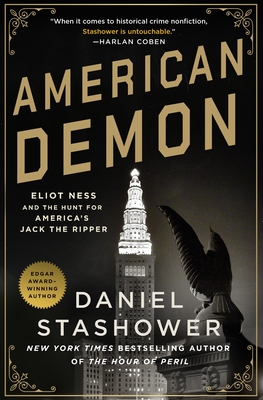 Boston had its Strangler. California had the Zodiac Killer. And in the depths of the Great Depression, Cleveland had the Mad Butcher of Kingsbury Run.

On September 5th, 1934, a young beachcomber made a gruesome discovery on the shores of Cleveland’s Lake Erie: the lower half of a female torso, neatly severed at the waist. The victim, dubbed “The Lady of the Lake,” was only the first of a butcher’s dozen. Over the next four years, twelve more bodies would be scattered across the city. The bodies were dismembered with surgical precision and drained of blood. Some were beheaded while still alive.

Terror gripped the city. Amid the growing uproar, Cleveland’s besieged mayor turned to his newly-appointed director of public safety: Eliot Ness. Ness had come to Cleveland fresh from his headline-grabbing exploits in Chicago, where he and his band of “Untouchables” led the frontline assault on Al Capone’s bootlegging empire. Now he would confront a case that would redefine his storied career.

Award-winning author Daniel Stashower shines a fresh light on one of the most notorious puzzles in the annals of crime, and uncovers the gripping story of Ness’s hunt for a sadistic killer who was as brilliant as he was cool and composed, a mastermind who was able to hide in plain sight. American Demon reconstructs this ultimate battle of wits between a hero and a madman.

Daniel Stashower is an acclaimed biographer and narrative historian and winner of the Edgar, Agatha, and Anthony awards, as well as the Raymond Chandler Fulbright Fellowship in Detective Fiction. His work has appeared in The New York Times, The Washington Post, Smithsonian Magazine, AARP: The Magazine, National Geographic Traveler, and American History as well as other publications.
His books include The Hour of Peril, Teller of Tales, and The Beautiful Cigar Girl.

“An iconic police investigator on the hunt for a grisly murderer. Put that on a double bill. I’ll go make the popcorn.” –Patton Oswalt, The New York Times

“Hang on for the ride…[American Demon] places you right on the scene, describing the ghastly horrors of [America's] Jack the Ripper while also recounting how crime fighter Eliot Ness started piecing the investigation together, one puzzle piece at a time.” --Forbes

"American Demon, beyond its contributions to the genre of American crime non-fiction, humanizes Ness and provides an honest portrayal of a complex man and the true stories that have cemented his place in history." —Fulbright Chronicles

“Annals of true crime rarely are as good as American Demon…No spoilers here, but only our strong recommendation: American Demon is worth seeking out and reading to reach your own conclusions.” --AirMail

“The combination of a baffling unsolved crime with a nuanced portrayal of an American icon adds up to another winner for this talented author.” –Publishers Weekly (starred)

“[Stashower] deftly sets Ness’ battles against institutional antagonists against an engagingly told, suspenseful account of the search for a notorious killer…riveting and illuminating.” –Kirkus Reviews (starred)

“This account is a gripping true-crime thriller that paints a picture of Ness that’s significantly different from the version we’ve seen in The Untouchables…True-crime fans will want this one on their TBR lists.” --Booklist

“[Stashower’s] personal connection to the city breathes life into the well-researched and chilling account.” –Library Journal

“Stashower's portrait of Ness is layered and he vividly re-creates a broken system.” –Minneapolis Star Tribune

“Edgar Award-winner Stashower (The Hour of Peril: The Secret Plot to Murder Lincoln Before the Civil War) approaches this material with a pit bull's tenacity, and he writes with the steeliness of an old-school journalist, suiting the book's place and time… a thrillingly bedeviling true crime story interlaced with a nuanced character study--not of the criminal but of his flawed pursuer.” –Shelf Awareness

“Daniel Stashower has a gift for peering into the dark, shadowy corners of American history and unearthing its most chilling and fascinating tales. American Demon is a twisting, true-life murder mystery about a serial killer who terrified a nation in the throes of the Great Depression—and his nemesis, famed lawman Eliot Ness, who was battling demons of his own. Stashower deftly fuses meticulous research with nail-biting storytelling to give this narrative history all the thrills of the best crime fiction.” --Abbott Kahler, New York Times bestselling author (as Karen Abbott) of The Ghosts of Eden Park

"The legendary Eliot Ness on the trail of a diabolical serial killer--a Hannibal Lecter running loose at the height of the Great Depression. And it’s all true. When it comes to historical crime nonfiction, Stashower is untouchable.” --Harlan Coben, New York Times bestselling author of Win

“Dan Stashower brings both the novelist's pen and the historian's eye to throw new light on one of history's most baffling cold cases.” –Donna Andrews, New York Times bestselling author of Murder Most Fowl

“Iconic lawman Eliot Ness is well known for his first act: helping to bust Al Capone, together with his intrepid band of Untouchables. With American Demon, Daniel Stashower takes a deep and fascinating dive into Ness’s even more intriguing second act: as Depression era safety commissioner of Cleveland, where he battled rampant corruption and led the hunt for a bizarre and baffling serial killer. Bringing the character and times to vivid life, Stashower once again makes an important contribution to the annals of American crime.” —Mark Olshaker, coauthor of Mindhunter, The Cases That Haunt Us, and The Killer Across the Table

“American Demon is a swirl of today's obsessions in a story of our yesterdays. The book has it all: Serial killers. American hero cops. Media frenzies. Politics. Romance. And it's all character-driven by the real life legendary figure of Eliot Ness from TV and book fame on the track of a monster. American Demon goes beyond a fascinating true crime story to a suspenseful revelation of our American realities.” --James Grady, creator of Condor and author of This Train