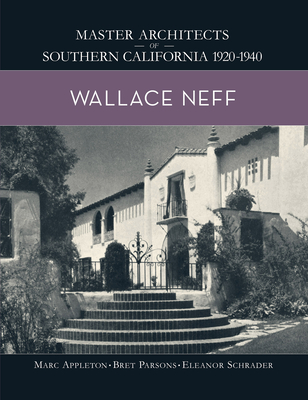 By Marc Appleton, Bret Parsons, Eleanor Schrader
$60.00
This item is out of stock with our warehouse. Some recently published books may be in stock @ Room. Email to check.

As part of a larger series on "Master Architects of Southern California: 1920-1940", this book highlights the work of Wallace Neff, using vintage photographs.

In the third volume of the Master Architects of Southern California series, Wallace Neff, the authors focus on one of the most admired and influential residential architects to ever practice in Southern California. In a remarkable career that spanned over six decades, Wallace Neff produced hundreds of exceptional designs that ranged from vernacular styles to grand mansions, reaching from Bel-Air to Santa Barbara to Hollywood and Hancock Park, with a proliferation of homes in the Pasadena area. Neff's ability to work in a variety of styles that ranged from Spanish Colonial Revival to French Normandy with equal grace made him a favorite with those seeking the very best. His client list with names like Doheny, Pickford, Gillette, and Marx- reads like a Who's Who of the most important and influential figures of the era. Additionally, Neff was known for his Bubble Houses which he described as a revolutionary method providing for low-cost, labor-saving process of extremely rapid construction of permanent houses and buildings.

Yet Wallace Neff became known as an "architect to the stars," a much sought-after designer for the elite of Hollywood with a stellar array of commissions from such legends of classic cinema as Claudette Colbert, Charlie Chaplin, Frederick March, Fred Thomson and Frances Marion, King Vidor, Darryl Zanuck, Alan Ladd, and Cary Grant. Other celebrity residents of Neff-designed homes have included Betty Grable, Diane Keaton, Jennifer Aniston, and Madonna.

Co-author and renowned architect Marc Appleton of Appleton Partners notes "These nearly forgotten architects needed to be memorialized, since their work is quickly disappearing. That's the purpose of the series Master Architects of Southern California 1920-1940. The authors included numerous of-the-era photographs which documented the exteriors and interiors, as well as lists of previous owners (current owners' names are withheld for privacy concerns).

Researching Neff's life, co-author and architectural historian Eleanor Schrader says she found the details of the architect's life and projects fascinating. "Neff's European training and keen eye for historical styles gave him the ability to combine Spanish, Tuscan, Mediterranean, Islamic, and other design elements that melded seamlessly into something he called 'The California Style.'"

Marc Appleton is the principal of Appleton Partners LLP, an architectural firm in Santa Monica and Santa Barbara. He has written, published, or contributed to many books including: George Washington Smith: An Architect's Scrapbook (2001), Robert Winter's Myron Hunt at Occidental College (2012), and Ranches: Home on the Range in California (2016). Marc lives in Santa Barbara.Bret Parsons has written five books, including Colcord Home (2008), the biography of the beloved Southern California architect Gerard Colcord. A residential Realtor, he founded Bret Parsons Real Estate in 2008. He is associate manager of the Hancock Park office of Compass, specializing in architectural properties. Bret resides in Los Angeles.Eleanor Schrader is an award-winning educator, lecturer, author, and historical design consultant. She lectures worldwide on the history of furniture, decorative arts, architecture, and interiors, and leads art and architecture tours throughout the world. She has been named a Distinguished Instructor at UCLA Extension, where she teaches in the Architectural and Interior Design Program. Eleanor resides in Los Angeles.