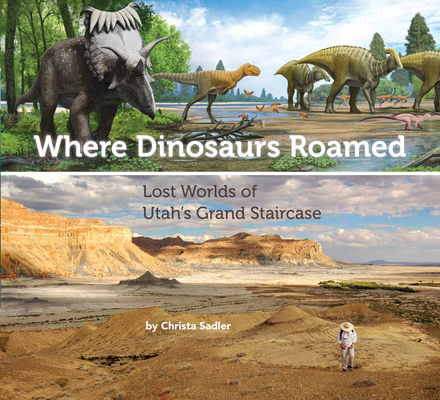 By Christa Sadler
$45.00
This item is out of stock with our warehouse. Some recently published books may be in stock @ Room. Email to check.

The Grand Staircase region, located in Southern Utah, is highly regarded as one of the best places in the world to study the period near the end of the Age of Dinosaurs--a time called the Late Cretaceous. In a relatively short period (geologically speaking) of about 25 million years, southern Utah was at times covered with an ocean teeming with life, swampy shorelines, and massive rivers draining a huge mountain range in the west. This diversity of plant and animal life has led to incredible fossil discoveries in the Late Cretaceous rocks, that have become a critical piece in a puzzle that stretches from Alaska to Mexico.

In Where Dinosaurs Roamed, Christa Sadler looks at this important era in the history of life. Modern mammals, birds, and flowering plants were just getting their start, slowly gaining ground in the ecosystems of the time. Many of the fossils that paleontologists have found in southern Utah are unique: big, headline-grabbing creatures such as a dinosaur with fifteen horns; a distinctive cousin of Tyrannosaurus rex; a peculiar scissor-clawed dinosaur with feathers; and a thirty-foot long alligator relative. Add to this a host of smaller vertebrates, invertebrates, and plants, and paleontologists have been able to recreate entire ecosystems from the time between 74 and 100 million years ago. Altogether, these finds paint a picture of life in a very hot world, and may have lessons to teach us about our future world as well.

Christa Sadler has a Master's Degree in Earth Sciences from Northern Arizona University, Flagstaff and is a trained paleontologist from the University of California, Berkley. She is editor and publisher of There's This River...Grand Canyon Boatman Stories and author of Life in Stone: Fossils of the Colorado Plateau and Dawn of the Dinosaurs: The Late Triassic in the American Southwest.