The Life and Art of Joseph Henry Sharp (Paperback) 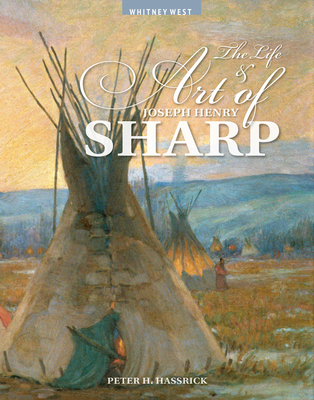 The Buffalo Bill Center of the West is a fount of major collections of art from some of the most renowned painters and sculptors of the American West. Holdings of artworks by titans such as Frederic Remington and Charles Russell number in the hundreds. The painter Joseph Henry Sharp, while claiming less space on the walls of the Center's Whitney Western Art Museum, is represented by a substantial number of works that reveal his joy and devotion to the West and to its indigenous people. The Center also owns a set of Sharp's papers, an extensive archive gifted by the artist's primary chronicler, Forrest Fenn of Santa Fe. Fenn also donated Sharp's Montana cabin, the "Absarokee Hut," to the Center, thus collectively making the museum a focal point for Sharp studies. This volume marks a fresh inspection of who Sharp was, how and where he was trained as a painter, why he selected the nation's western Native population as a primary subject, what impact his imagery had on audiences across the continent, and how his production as a painter of what he referred to as the "real Americans" differed from that of his contemporary peers. Beyond the pages of this book, and in conjunction with its findings and insights about Sharp, the Center has produced an online catalogue of some 700 examples of the artist's paintings held in public collections. The repositories of these works span the country from Washington, D.C., to Los Angeles with an obvious wellspring held by institutions in the West and Midwest. Readers who avail themselves of this volume's additional, electronic chapter will be rewarded with a vast and compelling compendium of Sharp's treasured paintings from over fifty museums, foundations, and libraries around the country.