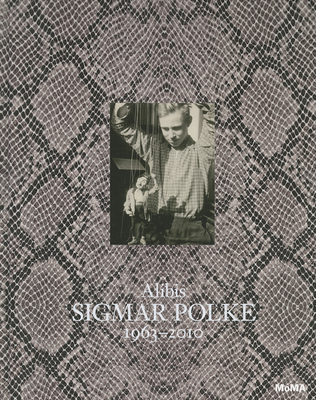 Working across an unusually broad range of media, including painting, photography, film, drawing and sculpture, Sigmar Polke is widely regarded as one of the most influential and experimental artists of the post-war generation. His irreverent wit and promiscuous intelligence, coupled with his exceptional grasp of the properties of his materials, provided the foundation for his punishing critiques of the conventions of art history and social behavior. Experimenting wildly with materials and tools as varied as meteor dust and the xerox machine, Polke made work of both an intimate and monumental scale, drawn from sources as diverse as newspaper headlines and D rer prints. Polke avoided any one signature style, a fluid method best defined by the word "alibi," which means "in or at another place." This also is a reminder of the deflection of responsibility which shaped German behavior during the Nazi period, compelling Polke's generation to reinvent the role of the artist. Published in conjunction with Alibis: Sigmar Polke 1963-2010, the first exhibition to encompass the artist's work across all media, this richly illustrated publication provides an overview of his cross-disciplinary innovations and career. Essays by Kathy Halbreich, Associate Director of The Museum of Modern Art; Mark Godfrey, Curator of International Art, Tate Modern; and a range of scholars and artists examine the full range of Polke's exceptionally inventive oeuvre and place his enormous skepticism of all social, political and artistic conventions against German history. Sigmar Polke (1941-2010) was born in Oels, in eastern Germany, now Olesnica in present-day Poland. At the end of World War II, Polke and his family fled to East Germany and, in 1953, escaped to D sseldorf, where he was trained as a glass painter and subsequently studied at the Kunstakademie D sseldorf. Since the late 1960s, Polke's work has been shown widely, including solo exhibitions at European and American museums. His last major work was a commission for 12 stained glass windows of the Grossm nster in Zurich, Switzerland, completed in 2009.--Holland Cotter "The New York Times.