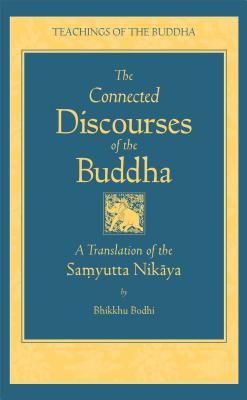 By Bhikkhu Bodhi (Translated by)
$75.00
This item is out of stock with our warehouse. Some recently published books may be in stock @ Room. Email to check.

This volume offers a complete translation of the Samyutta Nikaya, The Connected Discourses of the Buddha, the third of the four great collections in the Sutta Pitaka of the Pali Canon. The Samyutta Nikaya consists of fifty-six chapters, each governed by a unifying theme that binds together the Buddha's suttas or discourses. The chapters are organized into five major parts.

The first, The Book with Verses, is a compilation of suttas composed largely in verse. This book ranks as one of the most inspiring compilations in the Buddhist canon, showing the Buddha in his full grandeur as the peerless "teacher of gods and humans." The other four books deal in depth with the philosophical principles and meditative structures of early Buddhism. They combine into orderly chapters all the important short discourses of the Buddha on such major topics as dependent origination, the five aggregates, the six sense bases, the seven factors of enlightenment, the Noble Eightfold Path, and the Four Noble Truths.

Among the four large Nikayas belonging to the Pali Canon, the Samyutta Nikaya serves as the repository for the many shorter suttas of the Buddha where he discloses his radical insights into the nature of reality and his unique path to spiritual emancipation. This collection, it seems, was directed mainly at those disciples who were capable of grasping the deepest dimensions of wisdom and of clarifying them for others, and also provided guidance to meditators intent on consummating their efforts with the direct realization of the ultimate truth.

The present work begins with an insightful general introduction to the Samyutta Nikaya as a whole. Each of the five parts is also provided with its own introduction, intended to guide the reader through this vast, ocean-like collection of suttas.

To further assist the reader, the translator has provided an extensive body of notes clarifying various problems concerning both the language and the meaning of the texts.

Distinguished by its lucidity and technical precision, this new translation makes this ancient collection of the Buddha's discourses accessible and comprehensible to the thoughtful reader of today. Like its two predecessors in this series,

The Connected Discourses of the Buddha is sure to merit a place of honour in the library of every serious student of Buddhism.

Ven. Bhikkhu Bodhi is an American Buddhist monk from New York City, born in 1944. He obtained a BA in philosophy from Brooklyn College and a PhD in philosophy from Claremont Graduate School. After completing his university studies he traveled to Sri Lanka, where he received novice ordination in 1972 and full ordination in 1973, both under the leading Sri Lankan scholar-monk, Ven. Balangoda Ananda Maitreya (1896-1998). From 1984 to 2002 he was the editor for the Buddhist Publication Society in Kandy, where he lived for ten years with the senior German monk, Ven. Nyanaponika Thera (1901-1994), at the Forest Hermitage. He returned to the U.S. in 2002. He currently lives and teaches at Chuang Yen Monastery in Carmel, New York. Ven. Bodhi has many important publications to his credit, either as author, translator, or editor. These include The Middle Length Discourses of the Buddha (Majjhima Nikaya, 1995), The Connected Discourses of the Buddha (Samyutta Nikaya, 2000), and The Numerical Discourses of the Buddha (Anguttara Nikaya, 2012). In 2008, together with several of his students, Ven. Bodhi founded Buddhist Global Relief, a nonprofit supporting hunger relief, sustainable agriculture, and education in countries suffering from chronic poverty and malnutrition.

"To hold a copy of The Connected Discourses of the Buddha is like holding treasure in your hands. Bhikkhu Bodhi has, once again, given English readers all over the world another reason to rejoice by making the ancient words of the Buddha come alive in our contemporary lives. Timely and significant, highly readable, and invaluable."
— Eastern Horizon

"This new translation of The Connected Discourses of the Buddha has been well worth the wait. With painstaking care, the eminent Buddhist scholar monk, Bhikkhu Bodhi, has translated the 2889 discourses of the Buddha. No one is better qualified. Collected into their different themes, The Connected Discourses point the way to enlightenment. This book serves as one of the finest resources available for insight into the human condition. The Buddha addresses issues such as body/mind, daily life realities, suffering and joy, awareness and meditation. This book is rich in spiritual teachings, suitable for daily reflection, study, a manual for psychologists, a teaching guide at universities, and offering a wealth of benefits to anyone interested in the true heart of the Buddha's teachings. I regard it as an indispensable guide to an awakened life. With 2080 pages, it is an extraordinary publishing initiative. This book is worth every penny. Buy it. It is money well spent."
— Christopher Titmuss, author of Light on Enlightenment and An Awakened Life

"I am eagerly awaiting Bhikkhu Bodhi's new translation of the Samyutta Nikaya, The Connected Discourses of the Buddha. His brilliant, scholarly, and eminently readable version of The Middle Length Discourses set a benchmark for translations of the Buddha's words into English. This new work will make accessible even more of the original teachings, offering guidance, instruction and inspiration on the path of awakening. It is a priceless gift."
— Joseph Goldstein, author of Insight Meditation: The Practice of Freedom

"It is extremely good news to have Bhikkhu Bodhi--a brilliant translator--bring out a new edition of the Sayutta Nikya, one of the richest and most important of all Buddhist texts."
— Jack Kornfield, author of A Path with Heart