The Twilight of Equality: Neoliberalism, Cultural Politics, and the Attack on Democracy (Paperback) 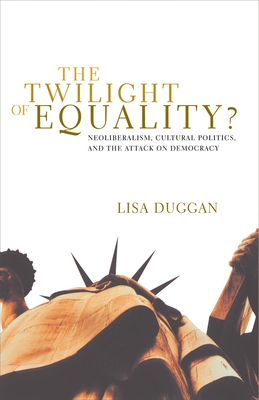 By Lisa Duggan
This item is not available to order from Room.

By now, we've all heard about the shocking redistribution of wealth that's occurred during the last thirty years, and particularly during the last decade. But economic changes like this don't occur in a vacuum; they're always linked to politics. The Twilight of Equality? searches out these links through an analysis of the politics of the 1990s, the decade when neoliberalism-free market economics-became gospel. After a brilliant historical examination of how racial and gender inequities were woven into the very theoretical underpinnings of the neoliberal model of the state, Duggan shows how these inequities play out today. In a series of political case studies, Duggan reveals how neoliberal goals have been pursued, demonstrating that progressive arguments that separate identity politics and economic policy, cultural politics and affairs of state, can only fail. Ultimately, The Twilight of Equality? not only reveals how the highly successful rhetorical maneuvers of neoliberalism have functioned but, more importantly, it shows a way to revitalize and unify progressive politics in the U.S. today.

Lisa Duggan is associate professor of American Studies and history at New York University. She is coeditor of Our Monica, Ourselves: The Clinton Affair and the National Interest and author of Sapphic Slashers: Sex, Violence, and American Modernity, which won the John Boswell Prize of the American Historical Association in 2001.

A superb book . . . [Duggan] reveals just how much the far-reaching neoliberal revolution has been advanced, at every step of the way, through insidious appeals to race, gender, and sexuality.--Andrew Ross, author of The Celebration Chronicles < br>
Brilliantly bold and coherent. [Duggan] rebuts the puritanical and the implicit, and makes a potent case for various hues of the unrepresented or underrepresented in American politics."--Akinbola E. Akinwumi, Politicalaffairs.net

"Duggan's well-reasoned argument is that true progressive change must occur not in parts but as a unified whole."--Publishers Weekly

"Finally, a cogent and hard-hitting attack on the cultural politics of neo-liberalism . . . We need Duggan's book, now more than ever, to point the way to new progressive politics, real social justice and a revitalized public intellectual sphere."--Judith Halberstam, author of Female Masculinity

"Lisa Duggan's insightful, carefully argued, and passionate book finally makes sense of neo-liberals' rise to power in the 1990s . . . Duggan leaves us with a brilliant analysis of where we are now and a map for how to get to a better, more just place."--Tricia Rose, author of Longing to Tell: Black Women Talk About Sexuality and Intimacy