Ned Christie: The Creation of an Outlaw and Cherokee Hero (Paperback) 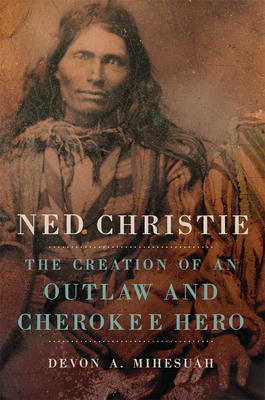 Who was Nede Wade Christie? Was he a violent criminal guilty of murdering a federal officer? Or a Cherokee statesman who suffered a martyr's death for a crime he did not commit? For more than a century, journalists, pulp fiction authors, and even serious historians have produced largely fictitious accounts of "Ned" Christie's life. Now, in a tour de force of investigative scholarship, Devon A. Mihesuah offers a far more accurate depiction of Christie and the times in which he lived. In 1887 Deputy U.S. Marshal Dan Maples was shot and killed in Tahlequah, Indian Territory. As Mihesuah recounts in unsurpassed detail, any of the criminals in the vicinity at the time could have committed the crime. Yet the federal court at Fort Smith, Arkansas, focused on Christie, a Cherokee Nation councilman and adviser to the tribal chief. Christie evaded capture for five years. His life ended when a posse dynamited his home--knowing he was inside--and shot him as he emerged from the burning building. The posse took Christie's body to Fort Smith, where it lay for three days on display for photographers and gawkers. Nede's family suffered as well. His teenage cousin Arch Wolfe was sentenced to prison and ultimately perished in the Canton Asylum for "insane" Indians--a travesty that, Mihesuah shows, may even surpass the injustice of Nede's fate. Placing Christie's story within the rich context of Cherokee governance and nineteenth-century American political and social conditions, Mihesuah draws on hundreds of newspaper accounts, oral histories, court documents, and family testimonies to assemble the most accurate portrayal of Christie's life possible. Yet the author admits that for all this information, we may never know the full story, because Christie's own voice is largely missing from the written record. In addition, she spotlights our fascination with villains and martyrs, murder and mayhem, and our dangerous tendency to glorify the "Old West." More than a biography, Ned Christie traces the making of an American myth.