Pity the Billionaire: The Hard-Times Swindle and the Unlikely Comeback of the Right (Hardcover) 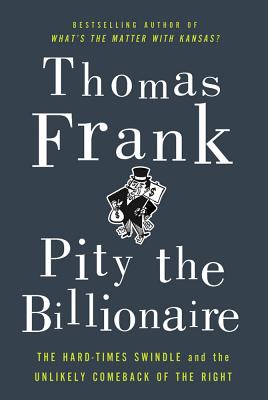 By Thomas Frank
$25.00
This item is out of stock with our warehouse. Some recently published books may be in stock @ Room. Email to check.

From the bestselling author of What's the Matter with Kansas?, a wonderfully insightful and sardonic look at why the worst economy since the 1930s has brought about the revival of conservatism

Economic catastrophe usually brings social protest and demands for change—or at least it's supposed to. But when Thomas Frank set out in 2009 to look for expressions of American discontent, all he could find were loud demands that the economic system be made even harsher on the recession's victims and that society's traditional winners receive even grander prizes. The American Right, which had seemed moribund after the election of 2008, was strangely reinvigorated by the arrival of hard times. The Tea Party movement demanded not that we question the failed system but that we reaffirm our commitment to it. Republicans in Congress embarked on a bold strategy of total opposition to the liberal state. And TV phenom Glenn Beck demonstrated the commercial potential of heroic paranoia and the purest libertarian economics.

In Pity the Billionaire, Frank, the great chronicler of American paradox, examines the peculiar mechanism by which dire economic circumstances have delivered wildly unexpected political results. Using firsthand reporting, a deep knowledge of the American Right, and a wicked sense of humor, he gives us the first full diagnosis of the cultural malady that has transformed collapse into profit, reconceived the Founding Fathers as heroes from an Ayn Rand novel, and enlisted the powerless in a fan club for the prosperous. The understanding Frank reaches is at once startling, original, and profound.

Thomas Frank is the author of "Pity the Billionaire," "The Wrecking Crew," "What's the Matter with Kansas?," and "One Market Under God." A former opinion columnist for "The Wall Street Journal," Frank is the founding editor of "The Baffler" and a monthly columnist for "Harper's." He lives outside Washington, D.C.

"No one fools Thomas Frank, who is the sharpest, funniest, most intellectually voracious political commentator on the scene. In Pity the Billionaire he has written a brilliant exposé of the most breath-taking ruse in American political history: how the right turned the biggest capitalist breakdown since 1929 into an opportunity for themselves." —Barbara Ehrenreich

"Tom Frank has the Tea Parties in his sights! Brisk and searing and deeply informed by the lessons of history (shocking notion!), Frank's latest guide for the perplexed is nothing less than a precious gift to us. Read it, and finally—You. Will. Understand." —Rick Perlstein

"Thomas Frank has crossed the Styx and returned to sing of the tortured, tormented souls of the Tea Party and their sufferings in the Socialist America they have conjured from thin air. This he does with grace, style and humor, which not all of his subjects share. Be glad that in this election year you can read Pity the Billionaire instead of turning on the television or the radio or your computer.  Pity the Billionaire?  Hell. Pity us all." —James K. Galbraith

“Thomas Frank is the thinking person’s Michael Moore. If Moore, the left-wing filmmaker, had Frank’s Ph.D. (in history from the University of Chicago), he might produce books like this one.” –Michael Kinsley, The New York Times Book Review

“A feisty and galvanizing book… This is the kind of analysis - historically astute, irreverent and droll - that makes Frank such an invaluable voice. As he's done in a series of perceptive books, Frank cuts through the partisan blather and explains how money and cynical ideas shape a certain kind of contemporary politics. "Pity the Billionaire" is further evidence that he's as good at this as any writer working today.” –San Francisco Chronicle

“An astonishing story…Frank is one of the best leftwing writers America has produced.”–The Guardian

“Thomas Frank writes English and not the chat of the pundits and mainstream columnists. He has learned things from Twain and Mencken, but the cartooning in this book is if anything restrained…The country is in suspense, from causes of which Pity the Billionaire gives a highly convincing account.” –Guardian Books

“Thomas Frank lays out with biting wit how today's conservatives co-opted that symbol and forged a pseudopopulist front to defend the enablers of market failure… A guide to help real populists elude their saboteurs.” –Mother Jones

“No figure on the American left knows more about the American right than Thomas Frank: columnist, editor, and hawkeyed observer of conservatism high and low.” –Christian Science Monitor

“Frank’s wit is as sharp as ever, and his eye for detail and his ability to capture a scene reminded me of reading zoologist Dian Fossey on a group of strange political primates.” –Washington Post

“A road map for everyone who wonders, while watching the hodgepodge of Republican presidential candidates: How the heck did all this happen?” –Fortune

“Forget “What’s the matter with Kansas?” The question Frank goes on the road to investigate this time is: What the f**k is wrong with America? Short-sighted fiscal policies have tanked the economy Great Depression–style, millions are jobless, foreclosures are at record highs, and pizza has been declared a vegetable. Why aren’t the adorable heads of the conservative-right wingdings behind much of the mess stuffed on pikes outside the White House? Is a good portion of the country suffering from Stockholm syndrome? Did somebody put something in our tea? What, pray tell, are the victims of these catastrophic policies thinking as they stand outside Arby’s banging out “She’s a Grand Old Flag” on their tin cups? Read the book. Tom Frank, as ever, makes some wickedly clever observations and produces some surprising answers.” –Elissa Schappell, Vanity Fair