Nobody's Perfect: Two Men, One Call, and a Game for Baseball History (Paperback) 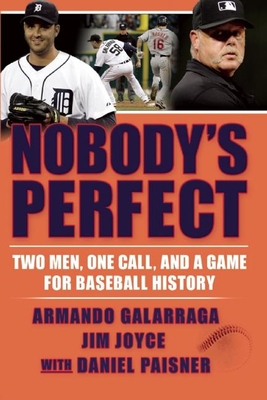 By Armando Galarraga, Jim Joyce
$15.00
This item is out of stock with our warehouse. Some recently published books may be in stock @ Room. Email to check.

The perfect game is one of the rarest accomplishments in sports. No hits, no walks, no men reaching base. Twenty-seven up, twenty-seven down. In nearly four hundred thousand contests in more than 130 years of Major League Baseball, it has only happened twenty times. On June 2, 2010, Detroit Tigers pitcher Armando Galarraga threw baseball's twenty-first perfect game. Except that's not how it entered the record books. That's because Jim Joyce, a veteran umpire with more than twenty years of big league experience, missed the call on the final out at first base. "No, I did not get the call correct," Joyce said after seeing a replay. "I kicked the sh*t out of it." But rather than throw a tantrum, Galarraga simply turned and smiled, went back to the mound and took care of business. "Nobody's perfect," he said later in the locker room. In Nobody's Perfect, Galarraga and Joyce come together to tell the personal story of a remarkable game that was will live forever in baseball lore, and to trace their fascinating lives in sports up until this pivotal moment.

You might think everything that could have been said, replayed and revealed about that night has already been uttered, logged and exposed. You would, however, be as wrong as the unfortunate Mr. Joyce was when he decided that Cleveland shortstop Jason Donald had beaten first baseman Miguel Cabrera's toss to Galarraga on what would have been the Indians' 27th consecutive out.” Neal Rubin, The Detroit News

Nobody's Perfect achieves the remarkable feat of taking us inside the heads of both the pitcher and the umpire at the moment of that call, and during everything leading up to it. Baseball players and officials pride themselves on appearing unreadable on the field but, in alternating chapters, Galarraga and Joyce reveal in their own words, with surprising candor, what was going on behind their opaque game faces. A thrilling, emotionally complex revisit to the legendary almost-perfect game of June 2, 2010, complete with the satisfying back story of the careers (and psychologies) of the pitcher and the umpire who shared a first-base call that made history.” John McFarland, Shelf Awareness

In the Big Events category, there was just one last year that had everyone talking: the perfect game spoiled by an ump’s blown call on what would have been the final out. But the response of the ump, Jim Joyce, and the pitcher, Tigers pitcher Armando Galarraga, thrust them both in to a small category of sports that actually ennobles the human race . Joyce’s abject admission of a mistake and Galarraga’s grace in accepting a near-miss with destiny made character the big sinner, detailed in their collaboration, with Daniel Paisner, in Nobody’s Perfect: Two Men, One Call, and a Game for Baseball History. ” Publishers Weekly, PW’s Top Ten Sports Books” for 2011