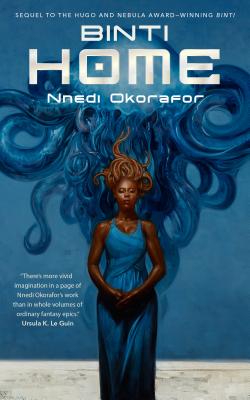 This is book number 2 in the Binti series.

The thrilling sequel to the Hugo and Nebula-winning Binti by Nnedi Okorafor, and a finalist for the 2018 Hugo and Nommo Awards

And now she must return home to her people, with her friend Okwu by her side, to face her family and face her elders.

But Okwu will be the first of his race to set foot on Earth in over a hundred years, and the first ever to come in peace.

After generations of conflict can human and Meduse ever learn to truly live in harmony?

"Binti is a supreme read about a sexy, edgy Afropolitan in space! It's a wondrous combination of extra-terrestrial adventure and age-old African diplomacy. Unforgettable!" - Wanuri Kahiu, award winning Kenyan film director of Pumzi and From a Whisper

"A perfect dove-tailing of tribal and futuristic, of sentient space ships and ancient cultural traditions, Binti was a beautiful story to read.” – Little Red Reviewer


“Binti is a wonderful and memorable coming of age story which, to paraphrase Lord of the Rings, shows that one girl can change the course of the galaxy.” – Geek Syndicate


“Binti packs a punch because it is such a rich, complex tale of identity, both personal and cultural… and like all of Nnedi Okorafor’s works, this one is also highly, highly recommended.” – Kirkus Reviews

NNEDI OKORAFOR, born to Igbo Nigerian parents in Cincinnati, Ohio on April 8, 1974, is an author of fantasy and science fiction for both adults and younger readers. Her Tor.com novella Binti won the 2015 Hugo and Nebula Awards; her children's book Long Juju Man won the 2007-08 Macmillan Writer's Prize for Africa; and her adult novel Who Fears Death was a Tiptree Honor Book. She is an associate professor of creative writing and literature at the University at Buffalo.

"Binti: Home is a rich, complex story of identity, family, and friendship. It's the rare sequel that exceeds the expectations set by the first—a futuristic story that is nonetheless vivid, emotional, and timeless." —Veronica Roth, #1 New York Times bestselling author of the Divergent series

"Okorafor's writing is even more beautiful than I remember it being in Binti, evocative and sharply elegant in its economy." —NPR

"[Binti: Home] opens up Binti's tale in astonishing ways, while provocatively exploring questions of identity and kinship." —The Chicago Tribune

PRAISE FOR BINTI AND NNEDI OKORAFOR

"Okorafor’s writing is wonderful, and the details of her world-building — including Binti’s rich culture of origin, living spaceships, and maths that reads almost like music — are complex and fascinating" —Veronica Roth

"Binti is a supreme read about a sexy, edgy Afropolitan in space! It's a wondrous combination of extra-terrestrial adventure and age-old African diplomacy. Unforgettable!"—Wanuri Kahiu, award winning Kenyan film director of Pumzi and From a Whisper