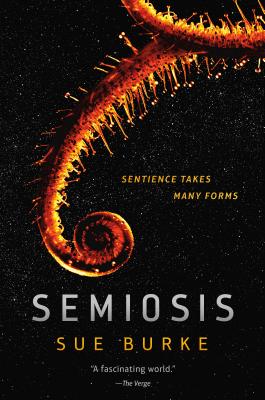 This is book number 1 in the Semiosis Duology series.

I love books with really ALIEN alien worlds. This multigenerational tale of human colonists ekeing life out of survival and community -- and learning to work with the native flora and fauna that have agendas of their own. Fascinating world-building.

I really enjoyed the structure of this novel (each chapter follows a character from a later generation, giving the reader insight over time while still being closely character-driven). I found the alien-ness of the alien planet intriguing, and I was generally grabbed by each subsequent thing that happened. I wouldn't say this book is a must read but it pushed a lot o f my buttons (alien ecology, survival, attempted utopias, generational drift, communication between wildly different species with potentially different goals, uneasy alliances...). I felt like the writing was a bit... generic? Each character didn't feel distinct, there was a bit more showing than telling, but it suited the practicality of the narrative well enough. Very readable, interesting thought experiment of a small human culture trying to make it on a new planet. The ending felt earned. — From Gretchen's Picks

Colonists from Earth wanted the perfect home, but they’ll have to survive on the one they found. They don’t realize another life form watches...and waits...

Only mutual communication can forge an alliance with the planet's sentient species and prove that humans are more than tools.

SUE BURKE spent many years working as a reporter and editor for a variety of newspapers and magazines. She is a Clarion workshop alumnus, and she has published more than 30 short stories. Burke also worked extensively as a literary translator, and while living in Madrid, Spain, she headed the long-running Madrid Writer’s Critique Group. Her translations include the fantasy novel Prodigies by Angélica Gorodischer, the bilingual science fiction anthology Castles in Spain / Castillos en el aire, and the script for the science fiction movie Mindgate.

“This is up there with Ursula K. Le Guin: science fiction at its most fascinating and most humane.“—Thrillist

“It makes the reader reexamine ideas about sentience. It is superbly written without an ounce of fat. Very cool indeed and highly recommended. It goes on my pile of books to be re-read.”—Tade Thompson, author of Rosewater and The Murders of Molly Southbourne

“A magnetic meditation on biochemistry and humanity.”—Locus Online

“Sharp, evocative . . . Semiosis unfolds the old science fiction idea of first contact in ways that are both traditional and subversive.”—The Christian Science Monitor

"Burke’s world building is exceptional, and her ability to combine the intricacies of colonization with the science of botany and theories of mutualism and predation is astounding." —Booklist

“A fresh and fun perspective on planetary exploration.”—The Bibliosanctum (4 out of 5 stars)

“Filled with questions about the nature of intelligence and how we value it, and humanity’s place within the universe, Semiosis is a provocative novel . . . ”—Fantasy Literature

“A fresh and thought-provoking take.”—Open Letters

“Semiosis combines the world-building of Avatar with the alien wonder of Arrival, and the sheer humanity of Atwood. An essential work for our time.”—Stephen Baxter, award winning author of The Time Ships

“This is top class SF, intelligent and engaging and I loved every moment of it.”—Adrian Tchaikovsky, winner of the Arthur C. Clarke Award for Children of Time

“In Semiosis, Sue Burke blends science with adventure and fascinating characters, as a human colony desperately seeks to join the ecosystem of an alien world.” —David Brin, author of Earth and Existence.

“A first contact novel like none you’ve ever read. . . . The kind of story for which science fiction was invented.” —James Patrick Kelly, winner of the Hugo, Nebula and Locus awards

“Sue Burke has created one of the most fascinating alien personae science fiction has seen in this decade.” –David Nichols, early American historian and author of Engines of Diplomacy

“A gripping story of colonization and biological wonders.”—Gregory Frost, author of the Shadowbridge novels

“A fantastic SF debut . . . Semiosis will remain relevant for years to come.” —Prof. Daniel Chamovitz, award-winning author of What a Plant Knows and Director of the Manna Center for Plant Biosciences at Tel Aviv University.