The Martian Child: A Novel About A Single Father Adopting A Son (Paperback) 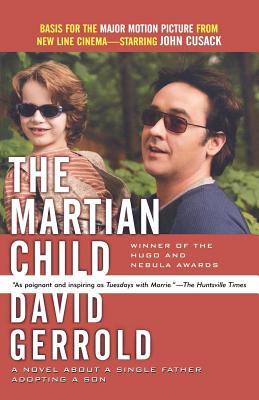 When David Gerrold decided he wanted to adopt a son, he thought he had prepared himself for fatherhood. But eight-year-old Dennis turned out to be more than he expected—a lot more. Dennis suffered from fetal alcohol syndrome, the son of a substance abuser and alcoholic who abandoned him in a seedy motel at the age of one-and-a-half. His father died of an overdose. Seized by the state, Dennis was shuffled between eight different foster homes in less than eight years. He was abused and beaten severely in at least tow of his placements. Dennis was diagnosed with attention-deficit hyperactivity disorder, and put on Ritalin and then Disipramine. He was prone to violent emotional outbursts. His case history identified him as "hard to place" —a euphemism for "unadoptable." But for David Gerrold it was love at first sight…

David Gerrold was barely out of his teens when he wrote the script "The Trouble With Tribbles" for the classic television series Star Trek. Nominated for a Hugo Award, it was listed by Playboy magazine as one of the 50 Greatest Television Episodes of All Time. And in a 1997 FOX TV special it ranked as the most popular science fiction episode on television of all time. He has written dozens of novels and twice has been nominated for both the Hugo and the Nebula awards. His novelette The Martian Child won the SF triple crown: the Hugo Award, the Nebula Award, and the Locus Readers Poll as Best Novelette. In addition to novel writing, he has written television scripts for Babylon 5, Tales from the Darkside, and The Twilight Zone. He served as a story editor/producer for the first season of Star Trek: The Next Generation. A frequent guest at SF conventions here and in Europe, he began a charity in 1988 in which money earned from charging one dollar for autographs -- plus profits from the sale of other SF memorabilia -- is donated to AIDS Project Los Angeles.

“The heart-searing moments are many but never overwritten, thanks to Gerrold's bright, efficient exposition.” —Booklist

“Gerrold, a Nebula and Hugo Award winner...deals with being a single, gay parent of a child who insists he is a Martian, a common defense mechanism used by abused and neglected children. The account moves quickly through months of adjustment, doubt, and finally acceptance of a situation that often has the potential for disaster.” —Publishers Weekly

“Sometimes parenting can be an encounter with aliens. The Martian Child is based on the author's true story of parenting as a single gay man. In the course of his undertaking, he becomes acquainted with the habits and behavior of an even more exotic creature, the Earth boy. It's a quick read, and a humanizing one.” —Bay Area Reporter