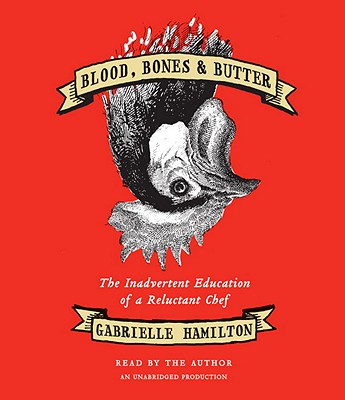 “This isn't your typical chef memoir. Gabrielle Hamilton has come to the stove by sheer force and tenacity, and it comes through on every page of her book. From a rural childhood with her large family hosting a lamb roast for 100 guests to owning one of the most respected restaurants in New York City, Hamilton's journey hasn't always been easy, but it has always been surrounded by good, 'real' food, which is where her passion lies. Hamilton writes so deliciously that your mouth will be watering as you read!”
— Sherri Gallentine, Vroman's Bookstore, Pasadena, CA

“This isn't your typical chef memoir. Gabrielle Hamilton has come to the stove by sheer force and tenacity, and it comes through on every page of her book. From a rural childhood with her large family hosting a lamb roast for 100 guests to owning one of the most respected restaurants in New York City, Hamilton's journey hasn't always been easy, but always surrounded by good 'real' food, which is where her passion lies. Hamilton writes so deliciously that your mouth will be watering as you read.”
— Sherri Gallentine, Vroman's Bookstore, Pasadena, CA

“I wanted the lettuce and eggs at room temperature . . . the butter-and-sugar sandwiches we ate after school for snack . . . the marrow bones my mother made us eat as kids that I grew to crave as an adult. . . . There would be no ‘conceptual’ or ‘intellectual’ food, just the salty, sweet, starchy, brothy, crispy things that one craves when one is actually hungry. In ecstatic farewell to my years of corporate catering, we would never serve anything but a martini in a martini glass. Preferably gin.”

Before Gabrielle Hamilton opened her acclaimed New York restaurant Prune, she spent twenty fierce, hard-living years trying to find purpose and meaning in her life. Above all she sought family, particularly the thrill and the magnificence of the one from her childhood that, in her adult years, eluded her. Hamilton’s ease and comfort in a kitchen were instilled in her at an early age when her parents hosted grand parties, often for more than one hundred friends and neighbors. The smells of spit-roasted lamb, apple wood smoke, and rosemary garlic marinade became as necessary to her as her own skin.

Blood, Bones & Butter follows an unconventional journey through the many kitchens Hamilton has inhabited through the years: the rural kitchen of her childhood, where her adored mother stood over the six-burner with an oily wooden spoon in hand; the kitchens of France, Greece, and Turkey, where she was often fed by complete strangers and learned the essence of hospitality; the soulless catering factories that helped pay the rent; Hamilton’s own kitchen at Prune, with its many unexpected challenges; and the kitchen of her Italian mother-in-law, who serves as the link between Hamilton’s idyllic past and her own future family—the result of a difficult and prickly marriage that nonetheless yields rich and lasting dividends.

Blood, Bones & Butter is an unflinching and lyrical work. Gabrielle Hamilton’s story is told with uncommon honesty, grit, humor, and passion. By turns epic and intimate, it marks the debut of a tremendous literary talent.

Gabrielle Hamilton is the chef/owner of Prune restaurant in New York's East Village. She received an MFA in fiction writing from the University of Michigan, and her work has appeared in "The New Yorker, The New York Times, GQ, Bon Appetit, Saveur, " and "Food & Wine. "Hamilton has also authored the 8-week Chef Column in T"he New York Times, " and her work has been anthologized in six volumes of "Best Food Writing." She has appeared on "The Martha Stewart Show "and the Food Network, among other television. She lives in Manhattan with her two sons. "From the Hardcover edition."

“Magnificent. Simply the best memoir by a chef ever. Ever. Gabrielle Hamilton packs more heart, soul, and pure power into one beautifully crafted page than I’ve accomplished in my entire writing career. Blood, Bones & Butter is the work of an uncompromising chef and a prodigiously talented writer. I am choked with envy.”—Anthony Bourdain

“Gabrielle Hamilton has changed the potential and raised the bar for all books about eating and cooking. Her nearly rabid love for all real food experience and her completely vulnerable, unprotected yet pure point of view unveils itself in both truth and inspiration. I will read this book to my children and then burn all the books I have written for pretending to be anything even close to this. After that I will apply for the dishwasher job at Prune to learn from my new queen.”—Mario Batali

“I have long considered Gabrielle Hamilton a writer in cook’s clothing, and this deliciously complex and intriguing memoir proves the point. Her candor, courage, and craft make for a wonderful read but, even more, for an appreciation of her talent and dedication, which have resulted from her often trying but inspiring experiences. Her writing is every bit as delectable and satisfying as her food.”—Mimi Sheraton, food critic and author of The German Cookbook and Eating My Words


"[A] lusty, rollicking, engaging-from-page-one memoir of the chef-owner of Prune restaurant in New York’s East Village. Hamilton opened her eating establishment without any prior experience in cheffing, but the life experiences she did have before that bold move, told here in honest detail, obviously made up for any deficiencies in heading up a restaurant and also provide material for an electric story that is interesting even if the author hadn’t become the chef-owner of a successful restaurant. An idyllic childhood turned sour when her parents divorced; her adolescence and young womanhood encompassed drugs, menial jobs, and lack of direction and initiative when it came to continued education. All’s well that ends well, however, and her story does indeed do that. Add this to the shelf of chef memoirs but also recommend it to readers with a penchant for forthright, well-written memoirs in general." – Booklist