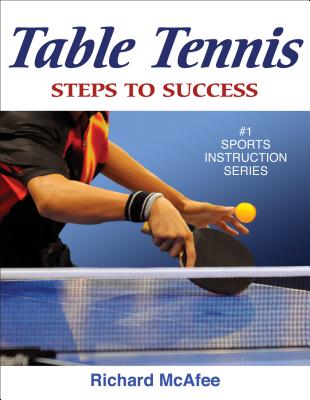 With a unique 11-step approach designed to maximize table tennis instruction, you'll learn the proper grip for your style of play, execution of the basic strokes, and the correct way to apply spin to the ball. Then, build on these core techniques with masterful footwork, serves, returns, and stroke combinations.

Best of all, learn how and when to apply those skills in match play. With competitive strategies—adapted for both you and your opponent's playing style—you'll raise your game to a new level. And with clear instruction, comprehensive coverage, detailed photo sequences, and drills to ensure mastery of every technique, you'll be playing—and winning—in no time.

Richard McAfee has a lifelong commitment to table tennis. In his early years, McAfee was a successful player, winning many singles and doubles events including the 1972 U.S. Open Class B Championship and the Southern Open Men's Singles title. Later McAfee began to focus on his true passion of coaching. He has coached national champions in each of the past three decades, seven world-ranked players, and two Olympians.

In 1994 McAfee was named competition manager for Table Tennis at the 1996 Atlanta Olympic Games. This led to further management positions on the international scene and earned him the International Olympic Committee's Olympic Merit Award. He is also certified by USA Table Tennis (USATT) as a national-level coach, their highest level. Honors include the 2004 U.S. Olympic Committee Doc Counsilman Science Award for table tennis, the 2003 Georgia AAU Coach of the Year award for table tennis, and the 1999 U.S. Committee Developmental Coach of the Year Award for table tennis. McAfee was inducted in to the U.S. Table Tennis Hall of Fame in 2005. In 2009, he was appointed chairperson of the USATT's National Coaching Advisory Committee. He continues to travel around the world conducting coaching education courses for the International Table Tennis Federation.

"In Table Tennis: Steps to Success, Coach McAfee covers all the essential skills for becoming a successful table tennis player. Anyone who appreciates the sport and wants to learn more will love this book."

"Table Tennis: Steps to Success is quite impressive. The step-by-step instructions lead players of all skill levels through the rules, drills, and tactics of the game."