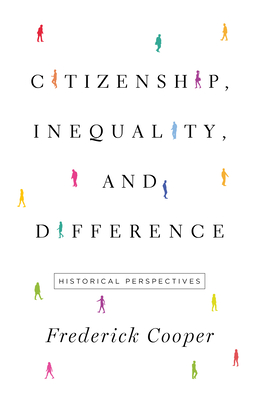 Who is a citizen, who can become a citizen and what civil and political rights are entailed with citizenship. This book goes back to Rome and forward to our current dilemmas. Prof. Cooper follows the historical layers of citizenship as it evolves from empire to the nation state, always keeping inequality and difference in the frame of analysis. This book is a great way to start thinking about who the civil and political you is. — From Jeff's Picks

Citizenship, Inequality, and Difference offers a concise and sweeping overview of citizenship's complex evolution, from ancient Rome to the present. Political leaders and thinkers still debate, as they did in Republican Rome, whether the presumed equivalence of citizens is compatible with cultural diversity and economic inequality. Frederick Cooper presents citizenship as claim-making--the assertion of rights in a political entity. What those rights should be and to whom they should apply have long been subjects for discussion and political mobilization, while the kind of political entity in which claims and counterclaims have been made has varied over time and space. Citizenship ideas were first shaped in the context of empires. The relationship of citizenship to nation and empire was hotly debated after the revolutions in France and the Americas, and claims to imperial citizenship continued to be made in the mid-twentieth century. Cooper examines struggles over citizenship in the Spanish, French, British, Ottoman, Russian, Soviet, and American empires, and he explains the reconfiguration of citizenship questions after the collapse of empires in Africa and India. He explores the tension today between individualistic and social conceptions of citizenship, as well as between citizenship as an exclusionary notion and flexible and multinational conceptions of citizenship. Citizenship, Inequality, and Difference is a historically based reflection on some of the most fundamental issues facing human societies in the past and present.

Frederick Cooper is professor of history at New York University. His many books include Empires in World History and Citizenship between Empire and Nation (both Princeton).