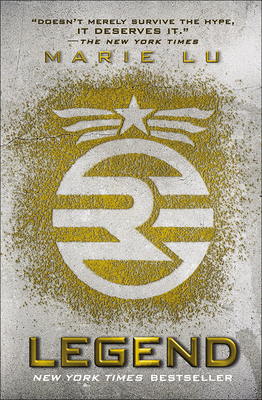 By Marie Lu
$22.80
This item is out of stock with our warehouse. Some recently published books may be in stock @ Room. Email to check.

“Born into an elite family in one of the Republic's wealthiest districts, 15-year-old June is a military prodigy committed to her country. Her complete antithesis is 15-year-old Day, the country's most wanted criminal and the prime suspect in the murder of June's brother. June sets out to capture Day, but, in a shocking turn of events, the teens discover a sinister conspiracy that pits both of them against the government. Filled with action and suspense!”
— Ellen Klein, Hooray for Books!, Alexandria, VA

A "New York Times" bestseller
What was once the western United States is now home to the Republic, a nation perpetually at war with its neighbors. Born into an elite family in one of the Republic's wealthiest districts, fifteen-year-old June is a prodigy being groomed for success in the Republic's highest military circles. Born into the slums, fifteen-year-old Day is the country's most wanted criminal. But his motives may not be as malicious as they seem.
From very different worlds, June and Day have no reason to cross paths - until the day June's brother, Metias, is murdered and Day becomes the prime suspect. Caught in the ultimate game of cat and mouse, Day is in a race for his family's survival, while June seeks to avenge Metias's death. But in a shocking turn of events, the two uncover the truth of what has really brought them together, and the sinister lengths their country will go to keep its secrets.
Full of nonstop action, suspense, and romance, this novel is sure to move readers as much as it thrills.

"New York Times" bestselling author Marie Lu (www.marielu.org) graduated from the University of Southern California and jumped into the video game industry, working for Disney Interactive Studios as a Flash artist. Now a full-time writer, she spends her spare time reading, drawing, playing Assassin's Creed, and getting stuck in traffic. She lives in Los Angeles, California (see above: traffic), with one boyfriend, one Chihuahua mix, and two Pembroke Welsh corgis.