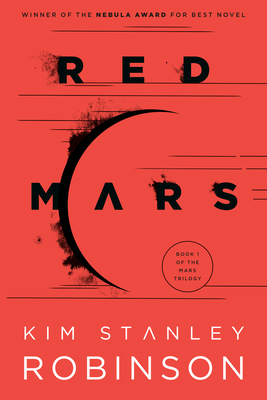 This is book number 1 in the Mars Trilogy series.

Winner of the Nebula Award for Best Novel • Discover the novel that launched one of science fiction’s most beloved, acclaimed, and awarded trilogies: Kim Stanley Robinson’s masterly near-future chronicle of interplanetary colonization.

“A staggering book . . . the best novel on the colonization of Mars that has ever been written.”—Arthur C. Clarke

For centuries, the barren, desolate landscape of the red planet has beckoned to humankind. Now a group of one hundred colonists begins a mission whose ultimate goal is to transform Mars into a more Earthlike planet. They will place giant satellite mirrors in Martian orbit to reflect light onto its surface. Black dust sprinkled on the polar caps will capture warmth and melt the ice. And massive tunnels drilled into the mantle will create stupendous vents of hot gases. But despite these ambitious goals, there are some who would fight to the death to prevent Mars from ever being changed.

Kim Stanley Robinson is a winner of the Hugo, Nebula, and Locus awards. He is the author of more than twenty books, including the bestselling Mars trilogy and the critically acclaimed Forty Signs of Rain, Fifty Degrees Below, Sixty Days and Counting, The Years of Rice and Salt, and Galileo’s Dream. In 2008 he was named one of Time magazine’s “Heroes of the Environment.” He serves on the board of the Sierra Nevada Research Institute. He lives in Davis, California.