The President and the Frog: A novel (Hardcover) 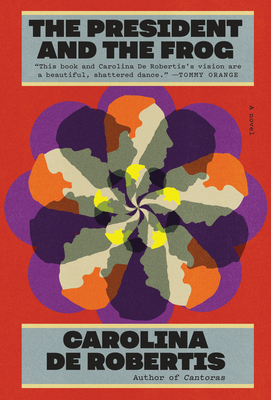 A "sublime and gripping novel ... about hope: that within the world's messy pain there is still room for transformation and healing" (Madeline Miller, New York Times bestselling author of Circe), from the acclaimed author of Cantoras.

“In the president’s excruciating (and sometimes humorous) encounters with his strangely healing frog ... De Robertis daringly invites us to imagine a man’s Promethean struggle to wrest control of his broken psyche under the most dire circumstances possible.” —The New York Times Book Review

At his modest home on the edge of town, the former president of an unnamed Latin American country receives a journalist in his famed gardens to discuss his legacy and the dire circumstances that threaten democracy around the globe. Once known as the Poorest President in the World, his reputation is the stuff of myth: a former guerilla who was jailed for inciting revolution before becoming the face of justice, human rights, and selflessness for his nation. Now, as he talks to the journalist, he wonders if he should reveal the strange secret of his imprisonment: while held in brutal solitary confinement, he survived, in part, by discussing revolution, the quest for dignity, and what it means to love a country, with the only creature who ever spoke back—a loud-mouth frog.

As engrossing as it is innovative, vivid, moving, and full of wit and humor, The President and the Frog explores the resilience of the human spirit and what is possible when danger looms. Ferrying us between a grim jail cell and the president's lush gardens, the tale reaches beyond all borders and invites us to reimagine what it means to lead, to dare, and to dream.

CAROLINA DE ROBERTIS is the author of five novels, including The President of the Frog, a finalist for the PEN/Faulkner Award and the PEN/Jean Stein Book Award, as well as Cantoras, winner of a Stonewall Book Award and a Reading Women Award, and a finalist for the Kirkus Prize and a Lambda Literary Award. Her work has been translated into seventeen languages and she has received a National Endowment for the Arts Fellowship, a Baldwin-Emerson Fellowship, Italy’s Rhegium Julii Prize, and numerous other honors. An author of Uruguayan origins, she teaches at San Francisco State University, and lives in Oakland, California, with her wife and two children.

“A moving, deeply felt novel, especially in the president’s excruciating (and sometimes humorous) encounters with his strangely healing frog. De Robertis daringly invites us to imagine a man’s Promethean struggle to wrest control of his broken psyche under the most dire circumstances possible.”
—Michael Greenberg, The New York Times Book Review

“Exceptional . . . [The President and the Frog] is a hopeful, entertaining paean to language, justice and perseverance.”
—Kevin Canfield, San Francisco Chronicle

“The President and the Frog is a story about stories, and how to remember the seeds we can be even in the bleakest times. There is such lucid tenderness in the book, but it is also wild, and funny. As we move through time, we return again and again to love, to growth, but through struggle, and madness, and yes, magnanimous conversations with a frog. This book and Carolina De Robertis’s vision are a beautiful, shattered dance.”
—Tommy Orange, author of There There

“Carolina De Robertis is a brilliant and luminous writer, and The President and the Frog is a joy to read. Playful and profound, unearthly yet deeply rooted, this sublime and gripping novel is above all about hope: that within the world's messy pain there is still room for transformation and healing.”
—Madeline Miller, author of Circe

“Visionary, biting with humor and deeply moving, The President and the Frog storms the limits of time and memory, human power and humility. De Robertis is a master storyteller and these pages astonish with their originality and brilliance.”
—Patricia Engel, author of Infinite Country

"A work of stunning insight and beauty, The President and the Frog is a song of hope in despairing times, a meditation on freedom and survival, on the quiet exultations of the ordinary (think Neruda's Odes to Common Things). A luminous, opulent, and unforgettable novel."
—Cristina García, author of Here in Berlin

“This is the story of the poorest President in the world, and what strange and fantastic things took place when he was a guerrilla kept in captivity and in isolation down a hole. A novel about connection and loss, the miracle of storytelling as survival, The President and the Frog is unconventionally bold and utterly, utterly bright. A beautiful and entrancing meditation about marvel and what it means to live and grasp for life in despairing times.”
—Ingrid Rojas Contreras, author of Fruit of the Drunken Tree

“Carolina De Robertis casts a bright light with all her work. I was delighted to open this book and very sad to close it. Her voice is what we need to bring us back to wholeness."
—Luis Alberto Urrea, author of The House of Broken Angels

“De Robertis . . . has crafted a tale of resilience, of the power of the human spirit to survive—a story set in a jail cell and rooted in the fantastic.”
—BookRiot, “24 Must-Read New Books of Spring and Summer 2021”

“Always surprising and unique, Carolina De Robertis has written a tale of hope and resilience found within the depths of despair by a Latin American president jailed in solitary confinement except for one thing: a frog.”
—Ms. Magazine, “August 2021 Reads for the Rest of Us”

“A classically harrowing journey . . . The tale alternates between this retired public official looking back on his storied career under the gaze of an outsider, and full immersion in the subterranean, dark, and dirty ‘Hole’ as this brave guerrilla relives torture and degradation. How does he survive? By talking with a frog . . . Readers will be inspired by De Robertis' timeless, lucidly told tale of a leader committed to his people.”
—Booklist

“De Robertis meditates on the fight for democracy in her pleasing latest . . . The tale’s simplicity belies considerable depth and resonance . . . In such a charged political moment, [The President and the Frog] lands as both a balm and a paean to national pride and unity.”
—Publishers Weekly